You are here: Home / Health / Successful Near-Total Face Transplant, Second One for the Cleveland Clinic 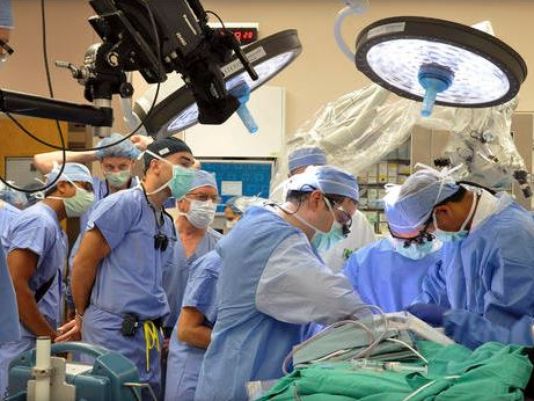 A near-total face transplant was made to a middle-aged man at Cleveland Clinic. The surgery took place in September this year and lasted for 24.5 hours. The surgery involved 9 surgeons, a number of medical experts and nurses.

The hospital said the patient wants to remain anonymous. In a statement released by the hospital Tuesday, the man said he is:

“grateful beyond words to the donor and his family for their amazing gift.”

“I would like to thank the Cleveland Clinic— all the surgeons and staff who helped me, so many talented hands helping me in so many ways.”

Doctors transplanted about two-thirds of the scalp, the forehead, upper and lower eyelids, eye sockets, nose, upper cheeks, upper jaw, upper teeth, salivary glands and nerves, muscles and skin. The patient is recovering well, breathing without a tube and is expected to be able to eat soon, the hospital said. Unfortunately he will need medicines for the rest of his life in order to prevent rejection of the new face.

The patient initially became a candidate for a face transplant after multiple attempts at facial reconstruction failed to correct his facial disfigurement and thus to improve his quality of life, as he still had difficulty breathing and speaking. A face transplant, by restoring eyelids, also offered a better chance to save the limited eyesight in his one eye that remained after the trauma. His limited eyesight has been preserved, making this the first face transplant to successfully save a patient’s vision.

All in all he patient is recovering well. He is now breathing without a tracheostomy and will begin eating orally shortly.

“This was a case of cooperative surgical innovation,”

Dr. Frank Papay, chairman of The Dermatology and Plastic Surgery Institute, said in the news release.

“This is a team sport and the patient is the most important part of the team. There is nothing more rewarding than making a profound difference in a patient’s life.”

More than two dozen face transplants have been done around the world, starting in 2005 with a French woman mauled by her dog.