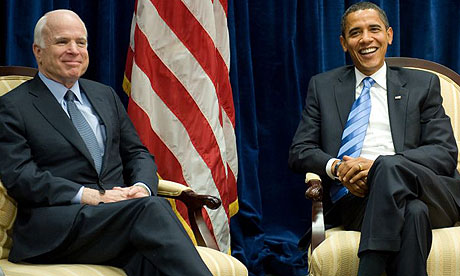 If there was an area where current president Barack Obama and 2008 presidential candidate John McCain clashed, none was more combustible than defense. And if back then views were completely different on the deployment of America’s young to wage war oversees, things are bound to get heated as McCain assumes the chairmanship of the Senate Armed Services Committee.

“We have no doubt that Senator McCain will be a formidable adversary as chairman of the Armed Forces Committee,”

The White House said in a statement, already foreseeing trouble.

The same statement, made by a senior administration official last week, included a hopeful note, insisting on the White House’s certainty that the two men would now be able to create a constructive relationship.

However, despite the White House’s hopes for the best, Mr. McCain has repeatedly called for the resignation of the president’s security team, accusing it of failing at its job of keeping Iraq Secure. Moreover, McCain also insisted that president Obama’s “airstrike strategy” was a sure recipe for disaster and that the White House had been churning out lies in defense of the military campaign plan in Iraq and Syria.

Mr. McCain will be able to schedule hearings with the American generals conducting campaigns in Iraq and Syria (where he believes that ground troops are mandatory). He will also have the opportunity of discussing the matter directly with these generals. McCain’s wishes are that the Committee be very active:

“That’s the beauty of the majority, as you know. Of course we can allocate and authorize certain programs, and we can cut others. The president proposes, and Congress disposes.”

Regardless of Mr. McCain’s position, President Obama, as commander in chief, will still hold the final vote as to whether American ground troops will be committed to the war against the Islamic State. He also controls whether the United States are prepared to better arm moderate rebels in Syria and whether the United States will take a stand against Vladimir Putin’s obvious violations in the Ukraine conflict.

“There is one commander in chief. Having said that, you can drive debates when you have the gavel.”

Mr. McCain even criticized recent Pentagon acquisitions, claiming that they had been subject to unnecessary cost overruns.

“The U.S.S. Gerald Ford was supposed to cost $10 billion, and it ended up costing $13 billion. I can’t tell you the number of things the state of Arizona could do with $3 billion. We lose our credibility when we advocate for increased defense spending and we don’t hold anyone responsible.”

McCain awaits to be officially named to the chairmanship by his Senate colleagues.