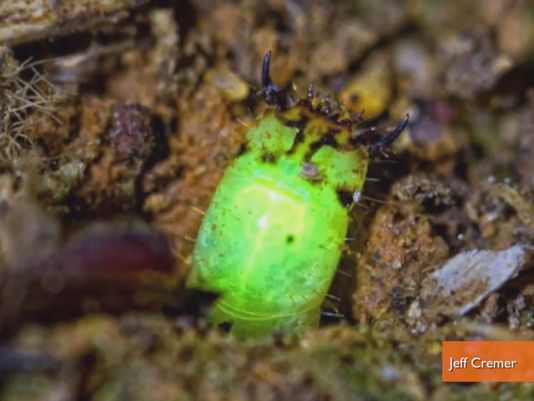 A not yet identified species of light emanating worms has been found in the deepness of the Peruvian rainforest.

The mysterious glow worms are presumed to be part the larval stage of a not yet identified species of click beetles.   They use their bodies to emanate light in order to attract prey like termites or ants.

Click beetles are part of the Elateridae family and they use a fact “clicking” motion to get out of the way of predators, thus their name. Even though adults feed mainly on flowers and nectar, the larvae are predatory. The glowing worms were found as they were crawling out off the ground and using their phosphorescence to attract their prey. When a wandering insect is close enough to the tiny worm’s jaws, it clamps them shut and that’s its meal.

The discovery was made by Jeff Cremer, a nature photographer. While searching new and interesting animals and plants to photograph in the Peruvian rainforest, he came across the tiny light emanating worms. Although he was first attracted by the light of one small larvae, he soon realized that there were dozens of them on a wall of earth. The worms measure only about 0.5 inches (1.2 centimeters) and they shine using a green light. After the discovery, Cremer contacted the entomologists who work at the rainforest nature lodge to ask more about the creatures. The entomologists however told him that it was actually the first time they’ve encountered something like these larvae, in the region.

According to Aaron Pomerantz, an entomologist who is part of a rainforest expedition near the Tambopata Research Center, Peru:

“They’re underground, and they burst from the earth.”

Researchers are now trying to find out how exactly the little insects emanate light and what is their role in the Amazon rainforest ecosystem.  The scientific term used to describe animals which emanate light is called bioluminescence. There are several reasons why insects and animals use light, counting luring prey, attracting mates or escaping predators.

Right now, the research team is not really sure if they have found an entirely new species or just a subspecies of a known species of beetle larva, so they are getting in touch with experts from Brazil to have a second opinion.

Meanwhile, although there are a lot more secrets to uncover about the mysterious tiny worms, the world can still be mesmerized by their beauty.