You are here: Home / Health / Kaiser Nurses Go On Strike for Better Protection Against Ebola 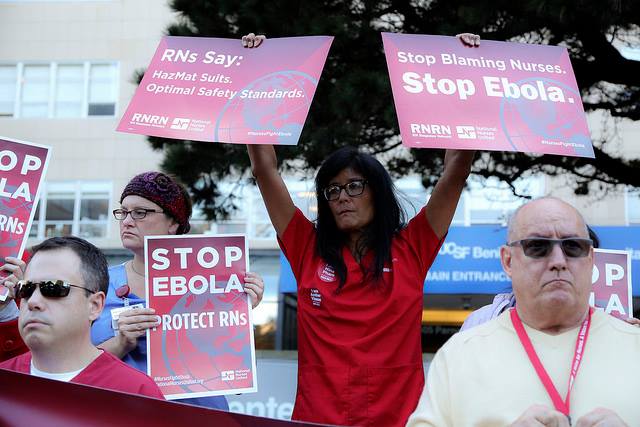 Around 18,000 nurses working for Kaiser Permanente will go on strike on November 11 and 12. National Nurses United is discontent with Kaiser Permanente’s recent decisions regarding the patient care standards. The nurses will walk out because they are not happy with how Kaiser Permanente decided to provide protection against Ebola.

Two Texas nurses got infected with Ebola while caring for Thomas Eric Duncan, the first man to die from the terrible virus on U.S. soil. Fortunately, both of them are now Ebola free. Although the Centers for Disease Control and Prevention subsequently released better indications for health workers dealing with the virus, NNU wants Kaiser Permanente to come up with improved solutions.

The union complained that Kaiser Permanente “continued to stonewall on dozens of proposals to improve patient care standards, as well as refusing to address the concern of Kaiser RNs about Ebola safety protocols and protective equipment, refusing to even answer questions by the RNs.”

NNU demands Kaiser to ensure the better safety measures by adopting the highest quality full-body hazmat suits that will leave no skin exposed while working with an infected patient, as well as stronger air purifiers.

Kaiser Permanente responded that “The reasons the union leaders gave for walking out are not supported by the facts – either in our medical centers or at the bargaining table. We have responded to all of the union’s negotiating proposals, and we look forward to more bargaining sessions.”

The health care provider has already opened a new facility in Oakland ready to host Ebola patients in the case of an outbreak. A Kaiser Permanente doctor said they are attempting to set the highest possible safety standards.

The strike will touch 65 Kaiser Hospitals and clinics. Emergencies will be properly handled, but some appointments will have to be rescheduled. According to NNU, tens of thousands of RNs from 16 states will participate at various actions meant to raise awareness about the dangers of working with Ebola patients. Up to 800 RN working for two other health care providers will join the Kaiser Permanente nurses.

California Nurses Association is affiliated with NNU, which gathers around 185,000 nurses. CNA has repeatedly renegotiated its contract with Kaiser Permanente in the last period. However, strike scheduled for next week is not based on financial demands, as the company hasn’t returned an offer yet.