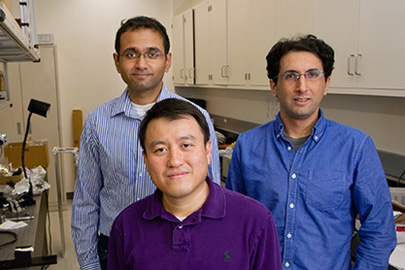 A team of Stanford University engineers developed new technology that allows heat and sunlight to be redirected from buildings and back into space without the use of electricity. This remarkable heat transfer technology allows buildings to be cooled even in the sunniest of days.

Stanford engineers came up with the idea after realizing that there was a great amount of energy to be spared throughout the US: up to 15 percent of the energy consumed across the nation is used up by residential air-conditioners.

Consequently, engineers developed a special paint coating solution that could, in theory, achieve the same results that air-conditioning does. What engineers came up with is an ultrathin, nanophotonic and multilayered material that reflects the sun by turning heat into visible light and reflecting it back as infrared radiation.

However, contrary to what would be expected, the reflected heat does not warm up the atmosphere.

This heat transfer technology was dubbed photonic radiative cooling and is achieved by combining silicon dioxide with hafnium dioxide and placing it over a thin layer of silver. Engineers layered these materials into a total of seven layers, measuring 1.8 microns (thinner than aluminum foil).

This breakthrough was achieved under the leadership of Professor Shanhui Han. He explains that objects radiating heat use heat sinks to dump that heat into. As such, the team of engineers attempted to use the Universe’s coldness as a heat sink. According to the results of their experiment, 97% of incoming heat is reflected by using their material, causing a decrease in air temperature by approximately 9 degrees Fahrenheit.

The team of engineers is confident that this new heat transfer technology will have many applications, especially in buildings with limited access to electricity (for instance, in developing countries).

There are still some challenges that engineers face before making such a material available for commercial use, however it shouldn’t be long before it will be available in every friendly Home Depot near you.