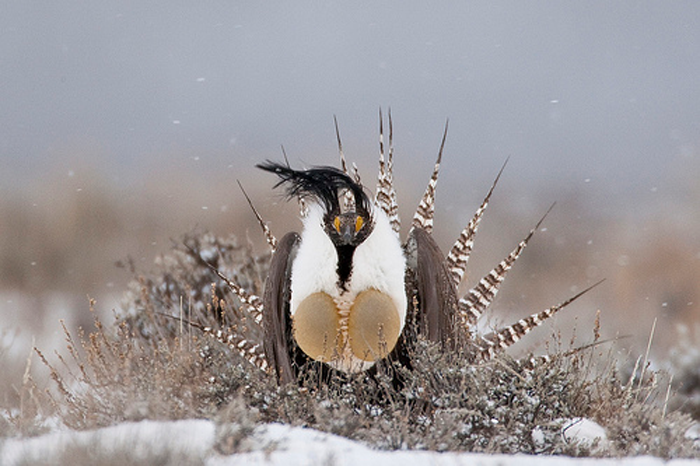 The Gunnison Sage-Grouse is a bird native to southeastern Utah and southeastern Colorado that is officially a threatened species, warranting protection under the Endangered Species Act, Federal Fish and Wildlife Service beginning Wednesday. The bird was initially proposed to FWS for listing back in January 2013, when fewer than 5,000 individuals had remained.

However it appears that the Wednesday decision is likely to harm the bird, rather than help it, undercutting local efforts to protect the species and instilling tedious layers of government bureaucracy to overcome. “Placing the bird under the oversight of the federal government will greatly reduce our ability to help the bird,” said Utah Division of Wildlife Resources Director Greg Sheehan.

Federal protection could impose restrictions on oil and gas development and other activity in the bird’s habitat in Colorado and Utah, although officials say the potential for energy development in the Gunnison grouse range is limited.

“I think that this does not bode well for the greater sage grouse,” said Amy Atwood, an attorney for the Center for Biological Diversity. Atwood said she hopes the greater sage grouse will be protected, but she fears the U.S. Fish and Wildlife Service will succumb to pressure from industries that oppose the land-use restrictions that such protection would bring.

Megan Mueller, a biologist for the environmental group Rocky Mountain Wild, said significant threats to the Gunnison grouse still must be addressed but that a delay might make sense. Protecting the Gunnison grouse would have broad benefits, Mueller said. “Grouse are an indicator species,” she said. “If you lose them, you also will be losing elk, deer and hundreds of other species that depend on that same ecosystem.”

Scientists say the greater sage grouse and the Gunnison sage grouse are related but separate species. Dan Ashe, director of the Fish and Wildlife Service, cautioned against viewing Wednesday’s decision on the Gunnison grouse as a clue to the ruling on the greater sage grouse. “These are separate species and a much different fact pattern,” he said. “I think the Fish and Wildlife Service makes decisions on the facts and the science as we see it in each case.”

Some Republican and Democratic members of Congress from both states criticized the decision.