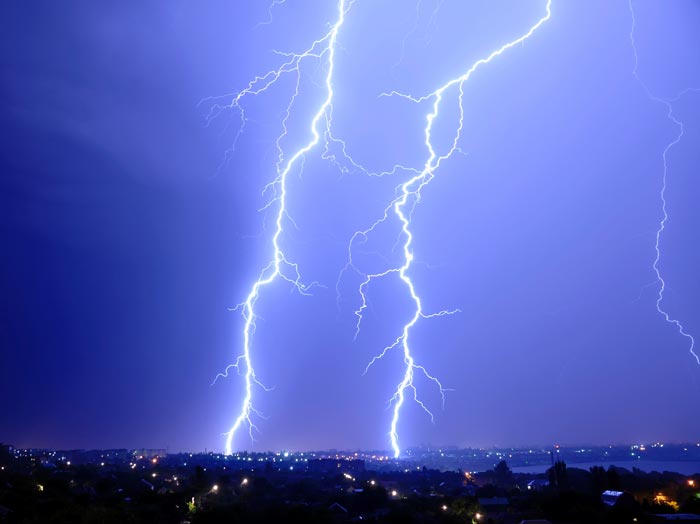 Researchers reported Thursday in the journal Science that the frequency of lightning flashes could rise by an estimated 50 percent across the continental U.S. over the next century. This increase could lead to more wildfires because lightning already triggers half of these blazes in the United States, the researchers said. Lightning also kills dozens of Americans annually, with that risk expected to rise.

Cloud-to-ground lightning occurs roughly 25 million times each year, a number which researchers believe could increase by 12 percent for each degree Celsius rise in global temperatures. “With warming, thunderstorms become more explosive. This has to do with water vapor, which is the fuel for explosive deep convection in the atmosphere. Warming causes there to be more water vapor in the atmosphere, and if you have more fuel lying around, when you get ignition, it can go big time,” David Romps of Lawrence Berkeley National Laboratory said.

In other words increased lightning will also affect greenhouse gases in our atmosphere, Romps explained, though that could be both a good and a bad thing. For instance, more lightning means more ozone, which is a potent greenhouse gas, Romps says.

Current predictions of lightning frequency are based on the thickness of thunderclouds as observations show that taller clouds generate more lightning, says Romps. Scientists’ equations make allowances for the fact that this increase in lightning is exponential, rather than a straight one-to-one relationship. The problem, says Romps, is that these estimates don’t take into account the many physical factors that can produce lightning, such as how much moisture is in the air or the potential of a thundercloud to generate upward movement of air.

In order to to get a sense of how lighting patterns will change in future climates, scientists have to rely on “proxies”, that are third-party forces they can model that have a known relationship to lightning. But nevertheless lightning is a complex phenomenon that still isn’t fully understood by atmospheric scientists, so proxies have mostly proven to be imperfect for one reason or another. As a result, the Science study explains, previous estimates for how lightning will change with global warming range from an increase of 5 percent to and increase of more than 100 percent for each degree of temperature rise.