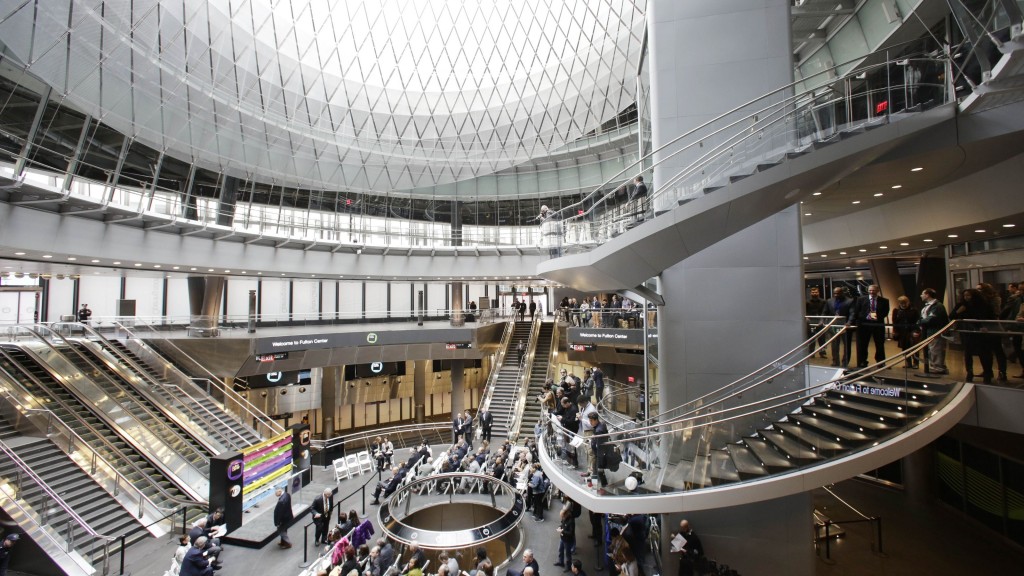 Fulton Centre, a $1.4bn space-age complex where nine tube lines converge, has been inaugurated by The Metropolitan Transportation Authority (MTA). The hub that merges century-old stations with the latest digital technology and design, will open to the public Monday morning, when hundreds of thousands of workers and commuters will enter what officials called Lower Manhattan’s “next great public space”.

A century later, and more than a decade after part of the Lower Manhattan subway complex was destroyed in the Sept. 11, 2001 terrorist attacks, the nine subway lines that converge on Fulton Street and Broadway have been knit together one more time.

Even two stories underground, natural light can be seen, and Downtown Alliance president Jessica Lappin referred to one subterranean spot where you can look up at the oculus as “The Circle of Light.” President of the Metropolitan Transportation Authority’s Capital Construction Company, the entity responsible for the project, Dr. Michael Horodniceanu has pointed out that when people can see where they need to go, they can move faster, and the Fulton Center is spacious and clear, with the three large staircase-and-escalator combinations and exits on the ground floor very obvious. More importantly, the whole facility is ADA-compliant, so commuters with disabilities will be able to travel seamlessly.

“I expect them to come in and see something they’ve never seen,” said Michael Horodniceanu. “This is something new, this is something exciting and this is one of a kind…and I hope people will be able to see that.”

The five underground stations partly damaged in the terrorist attacks on September 11 2001, were closed for months. Then, in 2012, Superstorm Sandy caused flood waters to roar into the tunnels. So this is a fresh start from all points of view.