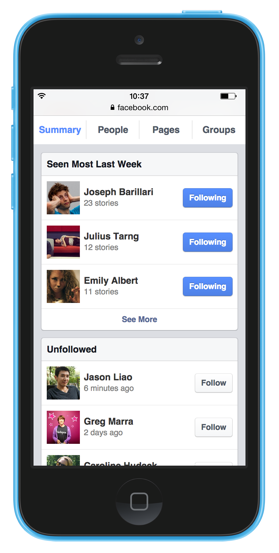 Facebook finally cave in to user demands after they grew frustrated because they can’t control their news feed as much as they wanted to. On Friday, Facebook introduced a new neat feature and showcased it on smartphones. The option should be available on the desktop version as well, according to the announcement.

Frustration must have reached new heights, because Product Manager Greg Marra, who made the news public on a blog post, underscored that “What you do in News Feed helps determine what you see in News Feed. You decide who you want to connect to, and what Pages and public figures you want to follow.”

The new option which goes by the name ‘News Feed settings’ will allow you to  check the most visible accounts on your News Feed during the last week – friends, pages, and groups. Moreover, you’ll have access to a summary of your activity. But most importantly, you’ll be able to select who you want to show up in your feed from now on. Unfollowing your boring cousin is just a tap away, while keeping in mind that you can always re-follow anyone you subjected to the harsh treatment.

However, many cases don’t require a radical approach. Friends obsessed over Game of Thrones may sometimes post interesting stuff. Facebook now offers a solution to the dilemma. Tapping the arrow on the top right of a story will give you the option to see less from the poster. Seeing less may be the most useful feature introduced by Facebook, as most people don’t necessarily want to break connections with heavy posters.

Again, none of these options is permanent.

Until today, clicking the wheel right next to the News Feed didn’t do too much. A list of those who you unfollowed was all the info you got, along with the option to remove items from the list.

The announcement comes just a day after Mark Zuckerberg raised the problem that bothered many Facebook users. While acknowledging a potential conflict between users and businesses in the News Feed management, Facebook’s CEO said that “in every decision that we make, we optimize for the first, for making it so that for the people that we serve that use Facebook and are reading News Feed get the very best experience that they can.”