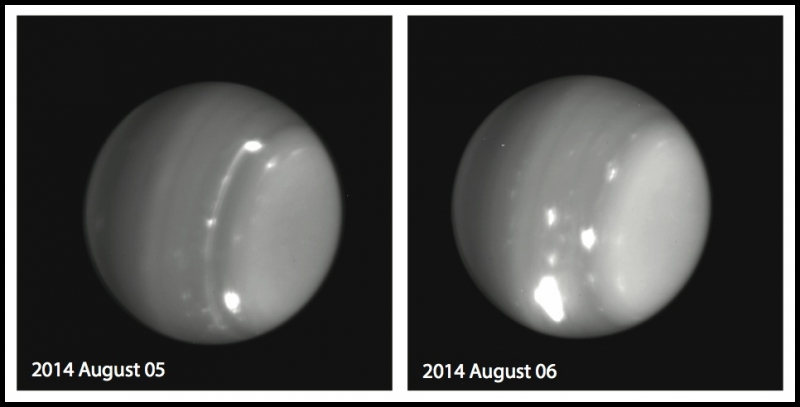 On a normal day, Uranus has a bland surface, however, astronomers have noticed that things are stirring up in the planet’s hazy atmosphere. Extreme storms and bright cloud systems have caught the attention of scientists who are now looking at Uranus’ atmosphere in a completely different way.

Imke de Pater, professor and chair of astronomy at the University of California explains that weather on the planet has been incredibly active. De Pater leads the team of astronomers who first noticed this remarkable activity by using adaptive optics on the W.M. Keck Observatory in Hawaii.

“This type of activity would have been expected in 2007, when Uranus’s once-every-42-year equinox occurred and the sun shined directly on the equator. But we predicted that such activity would have died down by now. Why we see these incredible storms now is beyond anybody’s guess.”

Heidi Hammel, co-investigator and member of the Association of Universities for Research in Astronomy said.

At least eight large storms were identified by De Pater and his team in the northern hemisphere of Uranus when they were observing the planet on August 5th and 6th. Of these storms, one was particularly striking because of its brightness: scientists explain that it was the biggest ever to be observed on Uranus, at 2.2 microns (this wavelength senses clouds located below the tropopause- this is the lowest boundary of the stratosphere). De Pater and his team explained that pressure ranges below the tropopause between 300 and 500 mbar (which is approximately half the pressure at the surface of Earth). And at this wavelength, the storm accounted for 30% of all light reflected by the planet.

Even amateur astronomers began tuning into the events taking place on Uranus. Marc Delcroix, for instance, processed his images and confirmed Régis De-Bénedictis’ discovery of a bright spot.

“I was thrilled to see such activity on Uranus. Getting details on Mars, Jupiter or Saturn is now routine, but seeing detail on Uranus and Neptune is the new frontier for us amateurs and I did not want to miss that. I was so happy to confirm myself these first amateur images on this bright storm on Uranus, feeling I was living a very special moment for planetary amateur astronomy.”

However, the bright storm identified by amateur astronomers is not the same storm that the Keck telescope identified. According to Larry Sromovsky, a planetary scientist at the University of Wisconsin, what amateur astronomers had identified was a storm at 1.6 microns emitted from deeper within Uranus’ atmosphere. This means that it was below the highest layer of methane ice in the planet’s atmosphere.

“The colors and morphology of this cloud complex suggests that the storm may be tied to a vortex in the deeper atmosphere.”

Such atmospheric changes only come to show how little scientists have yet to understand about the dynamic of outer planet atmospheres, the authors wrote in their paper.