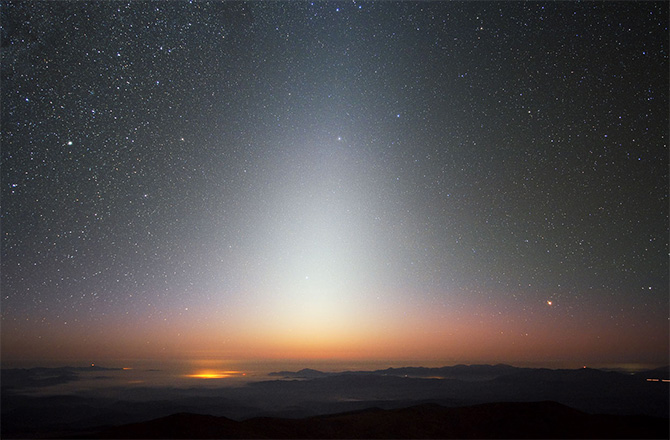 Astronomers are searching for signs of extraterrestrial life forms using all the tools they have. The Earth’s neighboring planets, as well as comets and asteroids are extensively researched with the help of orbiters and rovers. But finding habitable planets outside the Solar System is the astronomical Holy Grail. Unfortunately, a team of scientists found a characteristic that may hinder such a groundbreaking discovery.

The Very Large Telescope Interferometer (VLTI) is operated by the European Southern Observatory and sits at more than 8,500 feet high in Chile. The international team of researchers used all the four telescopes and pushed them to their limits to look at 92 stars.

Their aim was to observe how exozodiacal light affects the visibility of potentially habitable planets. Exozodiacal light occurs when starlight reflects on dust created after asteroids collide with each other. It was the first time when the phenomenon has been researched in the vicinity of nearby stars at this scale.

“If we want to study the evolution of Earth-like planets close to the habitable zone, we need to observe the zodiacal dust in this region around other stars,” said Steve Ertel, lead author of the paper, from ESO and the University of Grenoble in France. “Detecting and characterising this kind of dust around other stars is a way to study the architecture and evolution of planetary systems.”

Zodiacal light is visible from Earth, although very dark nights are required to notice the faint light. Exozodiacal light is a good indicator of a solar system’s age. As time passes, the dust tends to settle down, allowing greater visibility.

Scientists discovered exozodiacal dust in the hospitable regions around nine of the 92 stars. The light was 1000 times brighter than the one visible in our own Solar System.

“The high detection rate found at this bright level suggests that there must be a significant number of systems containing fainter dust, undetectable in our survey, but still much brighter than the Solar System’s zodiacal dust,” explains Olivier Absil, co-author of the paper, from the University of Liège. “The presence of such dust in so many systems could therefore become an obstacle for future observations, which aim to make direct images of Earth-like exoplanets.”

The discovery of the obstacle in the search of extraterrestrial forms of life may be a downer for some. Others will probably see it as a challenge. James Webb Space Telescope, to be launched in 2018 may offer new research perspectives, as Hubble’s successor will sport a 21 feet diameter mirror.