You are here: Home / Tech & Science / ESA in for 7 Hours of Terror During Risky Comet Landing 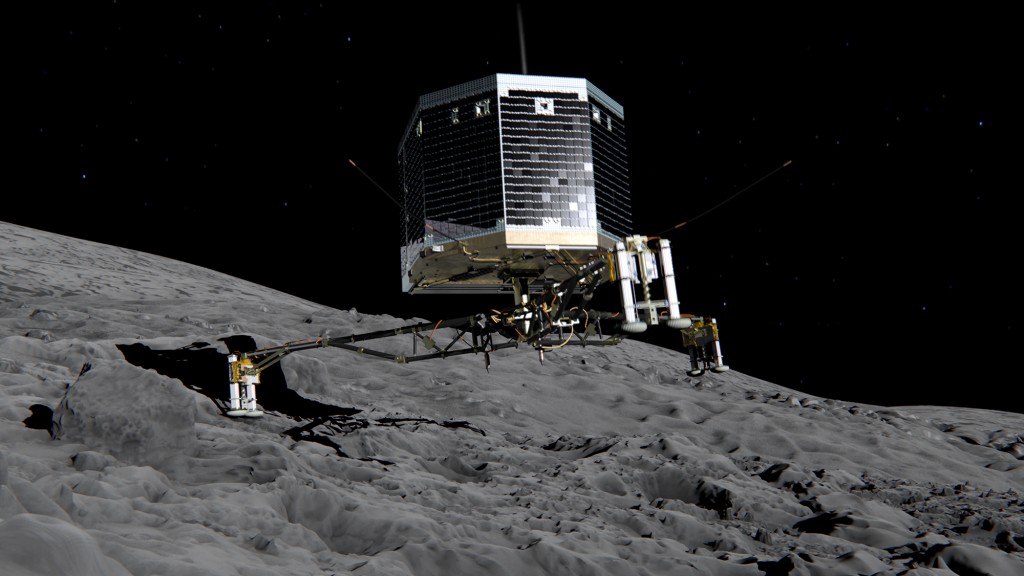 The European Space Agency (ESA) will be attempting one of its most difficult missions to date as it will try to land a probe on the surface of a comet whizzing through space. If successful, the mission will be the first of its kind.

The robotic Philae probe will be landing on Comet 67P/Churyumov-Gerasimenko’s surface on Wednesday, the 12th of November. 69P/C-G is approximately 2.5 miles wide and is currently traveling at a speed of 84,000 miles per hour. Live webcasts of Philae’s progress will be streamed starting November 11th and will continue through Wednesday.

By 11:02 AM EST on November 12th, the world should know if the landing went according to plan.

However, things are far from easy.

On Wednesday, Philae will begin its descent towards 67P/G-C. Three mechanical screws used to hold Philae’s lander to the Rosetta orbiter’s side will activate, pushing the lander away from the orbiter. This lander will then begin to fall towards the comet, however, due to the comet’s low gravity (1/60,000th of Earth’s gravity), the lander will take an agonizing 7 hours to reach the comet’s surface.

Philae’s washing-machine-sized lander will then use sensors attached to its feet to inform scientists what 67P/G-C’s surface feels like. Temperature measurements will be conducted, material will be scooped up by using a special drill on the lander so that scientists can analyze the comet’s composition.

There are three “pillars of danger”, Andrea Accomazzo, flight director for the European Space Operations Center, said during a press conference. Navigation is the first of the three pillars. The lander is required to leave the orbiter at precisely the right moment, it will have to move at the right velocity and at the right altitude so as to not miss the comet completely. And any error will grow larger in time as Philae needs 7 hours to reach its destination.

“If there is an error in the velocity by 1 centimeter per second, it will be propagated over the seven hours so that it winds up being an error of a couple hundred meters,”

Synchronization is another matter: Philae cannot communicate directly with Earth, so that Rosetta must intermediate communication. But what Accomazzo fears most is the landing. The comet’s surface is rough and strewn with bolders.

“This is the part that worries me the most because we have no control over it. All the other processes are our responsibility and we are prepared.”

Fortunately, even if Philae doesn’t perform a perfect landing, only 20% of the mission’s scientific data is expected from the landing. Rosetta is responsible for the remaining 80%.