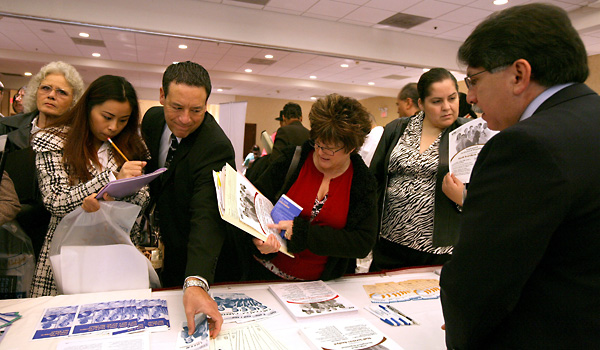 Only a few days after voters voiced their asperity regarding the U.S. economy, the government announced that employers added 214.000 extra jobs in October. This represents the healthiest pace of hiring in the last eight years. In addition to this, the Labor Department also announced that 31.000 more jobs, than were previously estimated, were added in August and September. These much needed jobs have lowered the unemployment rate from 5.9% to 5.8% – the lowest rate since July 2008.

“This was a great month for the American labor market. The U.S. job engine is not just chugging along; it is gaining speed.” – James Marple, TD Bank economist

However, statistics show that average hourly pay rose only slightly last month (with 3 cents, to 24.57$ – which is only 2% above the average pay 12 months ago). This is one of the major problems of America’s recovering economy. Stagnant wages have always been an issue in the job market since the recession ended, more than half a decade ago. The sluggish pace of salary growth was noted as the top concern of voters on Tuesday’s elections.

Irrespective of stagnant wages, America is recovering, and healthy job growth separates the U.S. economy’s steady gains, from stumbling economies overseas. While Europe is on the brink of its third recession, America is healing. Last month, more people started looking for work. At the moment, the percentage of Americans who have a job or are looking for is 62.8%.

Statistics also show that the number of unemployed has dropped below 9 million, and 267.000 people who had no jobs a few months ago, are now employed. In general low-paying industries registered an increase in employees. Retailers, hotels, entertainment firms and restaurants added roughly 80.000 jobs.

“The economy has been better, and that plays right into our hands.” – Scott Malat

U.S. manufacturers are expanding at a rapid pace (the fastest in the last three years), says a survey by the Institute for Supply Management. October represents the ninth consecutive month in which the economy has created over 200.000 jobs. The only problems that remain in the job sector are low wage growth, employment-to-population ratios and shrinking work-weeks. At the moment, the Federal Reserve is struggling to find a growth in hourly wages as it plans to implement its announced policy shift away from bond-buying.