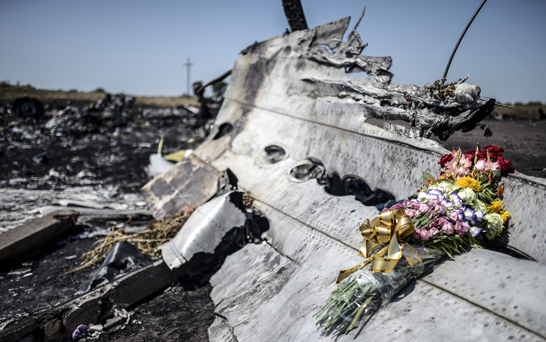 Dutch aviation safety experts began collecting wreckage parts of the Malaysia Airlines flight MH17 in eastern Ukraine from the crash site in the middle of the conflict zone.

Dutch inspectors hoped to collect the parts of the plane in order to rebuild it and determine the cause of the crash in July 17 that killed 298 people. Concerned about the safety of their people in the conflict zone held by rebels, they decided to work with local services. Flight MH17’s crash raised arguments between the West and Moscow over who was responsible.

The Dutch Safety Board said in a statement that depending on safety conditions and other factors, the recovery operation will take numerous days. The wreckage will be collected near the site after which it will be transported to the Netherlands. The Dutch Safety Board also said it can’t give specific details about the means and timing of the transportation.

“This will be assessed daily. The recovered wreckage will be collected at a location near the crash site, from where the wreckage will be transported to Kharkov and finally, to the Netherlands. At this point, the Dutch Safety Board cannot give detailed information on the means of transportation and the time schedule,”

The Safety Board said.

An initial report said the possible cause of the plane’s crash was due to suffering hits from “a large number of high-energy objects”. This supported allegations of a rocket bringing down the plane. Reassembling the fragments of the plane helped determine the reason of other accidents.

Flight MH17 was carrying 15 crew and 283 passengers when it crashed while it was travelling over a war zone in Ukraine on July 17. The aircraft was travelling from Amsterdam to Kuala Lumpur. Dutch people were the most present in the aircraft at over 190, followed by Malaysians. Other people were in the aircraft including individuals from the U.K., Belgium, Germany, Canada, the Philippines, New Zealand, Australia and Indonesia.

Analysis of the black box from the flight revealed no tones of warning in the cockpit and emergency was not declared before the flight abruptly ended.

Several nations and the U.S. have accused Russia of giving rebel fighters missiles, which were used to bring down the aircraft.