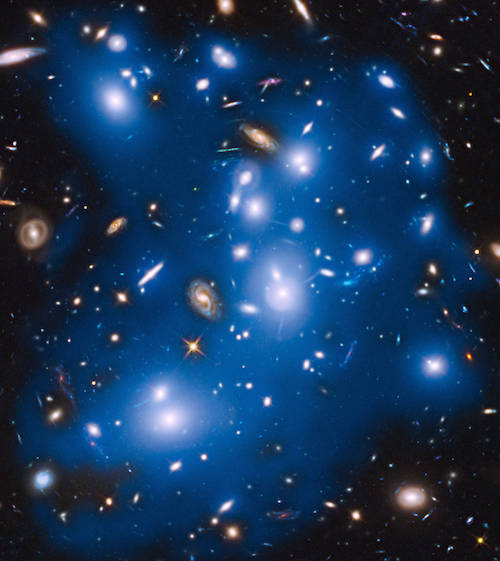 NASA’s Hubble Space Telescope surprised a unique, ghostly glow of stars which belonged to ancient galaxies 6 billion years away, NASA said. According to experts, the fate of these galaxies was similar and involved them being ripped apart by gravity.

Hubble Telescope spotted the chaotic, straying stars due to its infrared sensitivity to extraordinarily dim light, making Hubble the only instrument powerful enough to make such an observation.

The region where the wandering stars were spotted by Hubble is nicknamed, as luck would have it, “Pandora’s Cluster”.

“The mayhem happened 4 billion light-years away, inside an immense collection of nearly 500 galaxies nicknamed “Pandora’s Cluster,” also known as Abell 2744 [which – fact fans – weighs in at more than 4 trillion solar masses].”

Scientists explain that the scattered stars photographed by the powerful telescope are no longer bound to any galaxy. In fact, these stars are freely adrift between galaxies inside Pandora’s cluster.

“By observing the light from the orphaned stars, Hubble astronomers have assembled forensic evidence that suggests as many as six galaxies were torn to pieces inside the cluster over a stretch of 6 billion years.”

Extrapolating the data collected by Hubble, astronomers could conclude that the galaxies from which these straying stars stemmed may have been as big as our Milky Way. Computational modeling of the gravitational dynamics among galaxies found in clusters showed that gravity is, indeed, one of the fiercest foes in the universe.

“The Hubble data revealing the ghost light are important steps forward in understanding the evolution of galaxy clusters. It is also amazingly beautiful in that we found the telltale glow by utilizing Hubble’s unique capabilities.”

“The results are in good agreement with what has been predicted to happen inside massive galaxy clusters,”

It has been particularly difficult for Hubble Space Telescope to identify these orphaned stars until now because Pandora’s cluster is home to approximately 200 billion bright stars. The collective radiance greatly surpasses that of the drifting stars, which combined only makes up 10 percent of the entire light originating from the cluster.

It took the Hubble Space Telescope more than 10 years to capture an image as valuable as this.

Researchers published their findings in the Astrophysical Journal’s October issue.