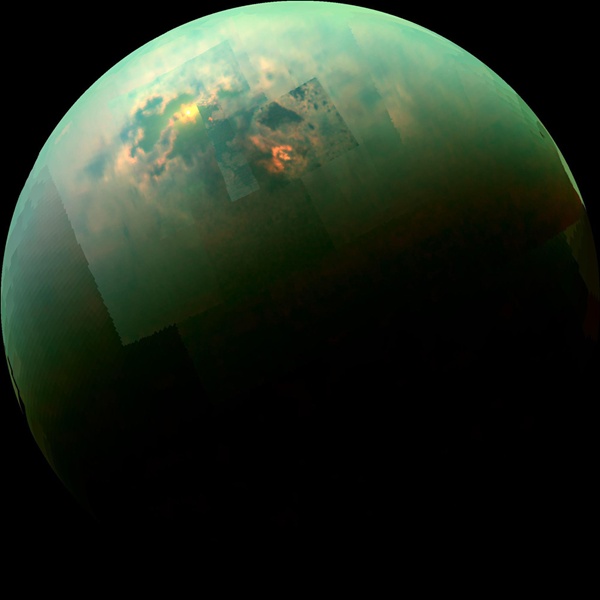 Photographs of Saturn’s moon, Titan, captured by the Cassini probe have just been released by NASA. The photographs show a mosaic image of light and shadows reflecting off of Titan’s polar seas.

These images are what astronomers call “specular reflections” and were so intense that the detector of Cassini’s Visual and Infrared Mapping instrument was saturated. NASA’s probe collected these stunning images on the 21st of August, during a fly-by of Saturn’s moon. It is true that there have been previous pictures capturing Titan’s polar seas reflecting the sunlight, however, photographs never surprised more than one sea reflecting sunlight at the same time.

These pictures contain the most particular of specular reflections, with the highest observation elevation of any similar events observed on Titan. According to measurements, the Sun was at 40 degrees above the horizon of this unique Saturn moon when Cassini took the image.

Kraken Mare is the sea reflecting the sunlight, Titan’s largest sea. In the southern part of Titan’s sea, astronomers could see the specular reflection which appeared north of the archipelago dividing the Kraken Mare in two.

On the southern margins of the sea, bright evaporite deposits could be identified by scientists, who claim that such deposits indicate that the sea is shrinking through the evaporation of its components (ethane and methane). Apart from the Kraken Mare, the image also shows a network of channels connecting Kraken Mare to a sea in the neighborhood, Ligeia Mare, which is partially concealed by a bank of clouds. These clouds, scientists revealed, are composed of liquid methane droplets which could, in theory, replenish the seas if they are producing rain.

The image obtained by Cassini features the event in colors invisible to the human eye and as such, it required special color treatment for us to distinguish the elements photographed. Titan has an atmosphere that easily obscures the moon’s surface, which the human eye can only perceive as a sphere of haze.