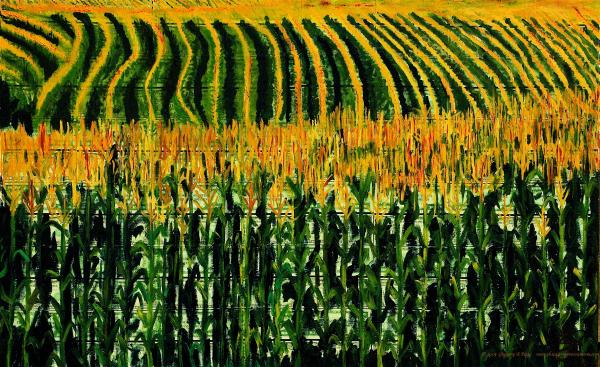 Scientists have taken a particular interest in the annual fluctuation of atmospheric carbon dioxide, which is connected to the growth patterns of plants (thriving during summertime and seeping through the winter). In a recent study, however, researchers noted that the summer upswing of atmospheric carbon dioxide is getting bigger with each passing year and began searching for the cause of this unexplained increase.

Scientists explain that crops are not only pulling in more atmospheric carbon but that they are also releasing it back in increased quantities.

This cycle is normally quite simple: all across the Northern Hemisphere, carbon dioxide levels decrease during summer time (as it is “inhaled” by plants during their growing season). As summertime comes to an end, levels shift upwards again as plants no longer use up so much carbon dioxide.

Mark Friedl, professor at Boston University’s Department of Earth and Environment and lead author of the study explains that this seasonal cycle is closely related to vegetation. However, the cycle seems to be shifting because man has caused ecosystems to be altered. Crops are becoming more productive so they have to pull in more of the atmospheric carbon during summertime. This effect also has a downside in the sense that during the dormant period, more carbon is released.

The results of the study led by Mark Friedl were published in the journal Nature. They suggested that agricultural production can explain such sudden swings because it is responsible for as much as a quarter of the increase. Corn, the study said, is the number one culprit.

According to Friedl and his team, such alterations in the atmosphere’s composition represent one of the most important fingerprints of human activity on Earth.

The study was based on data gathered from global production statistics throughout the world. Four leading crops were the study’s main focus: corn, rice, soy and wheat. These crops account for 64 percent of the world’s total consumed calories and since 1961, their production has doubled across the Northern Hemisphere. This production translates into approximately a billion metric tons of swinging carbon.

But agriculture is not the sole contributing factor. Global warming with its ever warmer temperatures also play a decisive role, causing growing seasons to become longer and influencing carbon uptake by vegetation (it also causes vegetation to appear at higher latitudes than normal).

“This study shows the power of modeling and data mining in addressing potential sources contributing to seasonal changes in carbon dioxide. It points to the role of basic research in finding answers to complex problems.”