You are here: Home / Uncategorized / Ancestor of Rhino and Horse Found in India 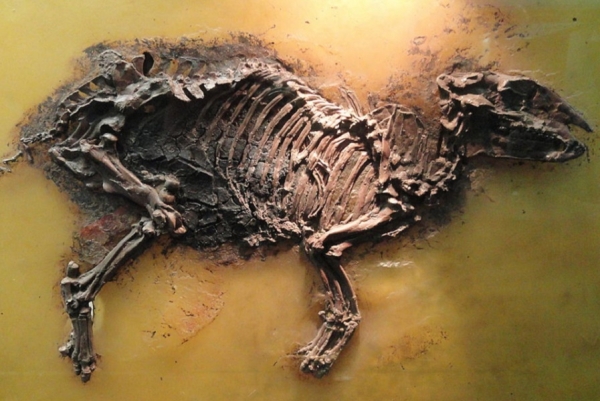 It may be hard to believe, but both horses and rhinos belong to the same family, Perissodactyla. However, an evolutionary  gap that was missing was recently found by paleontologists, in India.

Perissodactylia is a biological group of animals that have an uneven number of toes and a digestive system different from any other animal species.

The fossil of what is presumed to be the common ancestor and also the missing evolutionary gap between modern horses, rhinos and even tapirs, was unearthed by a group of researchers from the Johns Hopkins University School of Medicine. The discovery was made near a coal mine, in India’s Gujarat state.

Several preserved bones were dug up by experts who dated them to more than 54 million years ago. The animal was called Cambaytherium thewissi and it seems to have lived while India was still an island, thus prior to the collision with Asia.

“Many of Cambaytherium’s features, like the teeth, the number of sacral vertebrae, and the bones of the hands and feet, are intermediate between Perissodactyla and more primitive animal. This is the closest thing we’ve found to a common ancestor of the Perissodactyla order.”

Although perissodactyl fossils have been found from as early as the Eocene epoch (more than 56 million years ago), the earliest evolution of this animal group still raises questions among researchers.

Cambaytherium is supposed to have been about the same size as a modern wild pig and to have weighed around 45 to 75 pounds. As not much is known about Perissodactyls and the Eocene epoch, this is as close as the experts got to the animal’s appearance.

Scientists also believe that, back when India was an island, some animals have migrated from the other continents, since fossils of similar European animals were found in the area. However, due to the uniqueness and evolution of the Cambaytherium, the island is believed to also have been isolated at some point.

“One possible explanation is that India passed close by the Arabian Peninsula or the Horn of Africa, and there was a land bridge that allowed the animals to migrate,”

The findings were published in the Nature Communications journal on Thursday, the 20th of November.