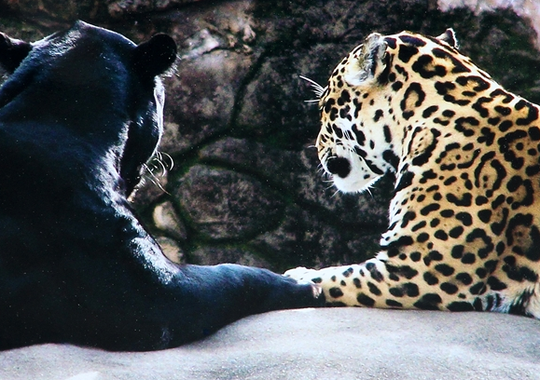 A horrifying accident took place on Friday morning, at the Little Rock Zoo- a 3-year-old toddler fell in the Jaguar Zoo exhibit and was brutally mauled by the two felines. According to eye witnesses, the child’s grandfather put him on the ledge from which he fell 16 feet, straight into the cats’ den.

The little boy, who is now in stable condition, suffered puncture wounds, extensive scalp lacerations and a depressed skull fracture. Fox 16 reported that the child was initially listed in critical condition. After seeing that the wounds were not life-threatening, doctors upgraded his condition to stable.

Witnesses say that the father and grandfather started throwing objects at the jaguars in order to keep them away from the toddler.

“The child was then handed to the child’s father and both were taken by golf cart to the Zoo\s back-gate entrance where the child was placed in an ambulance and taken to a nearby hospital.” – Little Rock City Manager, Bruce Moore

Witnesses declared to the police station that the two cats bit the child’s neck and foot. They only let go of them after the father and grandfather started throwing large objects at them. The response of Zoo staff was swift. One zookeeper used a fire extinguisher to keep the cats at bay as he tried to extract the child. The other zookeeper climbed down a ladder and managed to pull the boy out of there.

“Yesterday a child was transported to Arkansas Children’s Hospital for treatment of injuries sustained in a fall at the Little Rock Zoo. The child’s condition has been upgraded to stable and is expected to improve. We respect the wishes of the child’s guardian who asked that the child’s name and any additional information not be shared at this time.” – Dan McFadden, director of Communications, Children’s Hospital

The police report said that the father & grandfather saw the child’s feet go over the top of the railing. One of the cats run off and didn’t return for a while, the other circled the boy and, supposedly, bit its neck. Soon after the accident happened, zoo workers arrived. They scared the animals and saved the child. Captain Weaver, of the Little Rock Fire department said that the toddler was removed from the enclosure before the fire department arrived.

Luckily for the child, an ambulance was posted in that area and it took only three minutes for him to be taken to the hospital.

“Our thoughts and prayers are with the child and the family. The safety of our citizens is of paramount value and our staff followed training procedures on rescuing the child and were able to respond quickly and efficiently, and work with emergency personnel. A full investigation into the incident is being conducted.”