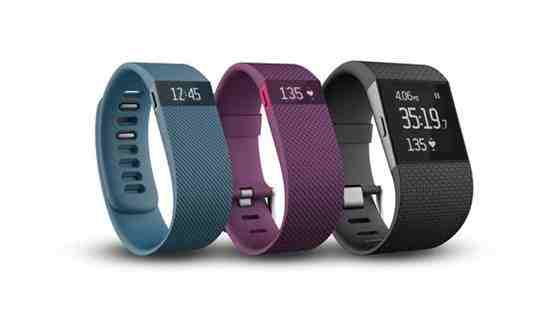 Fitbit has released three new Fitbit fitness trackers yesterday, during the Fitbit media event. Long before smartwatches were popular, Fitbit was making a name for itself in the wearables market, with the introduction of the pocket clip-on Fitbit Tracker in 2008. It sensed the user’s movement and measured the number of steps taken. It combined this with user data to calculate distances and calories burned. It was an innovative piece of electronics and now, six years later, Fitbit has released three new Fitbit fitness trackers.

The three new models from Fitbit are: Fitbit Charge, Fitbit Charge HR and Fitbit Surge. The simple Charge model costs $129 USD and it is made of reinvented materials that will eliminate any type of potential skin irritation. It has eight sensors, including an accelerometer and gyrometer and it warns the owner of incoming calls through Bluetooth. It will track specs and your sleeping patterns, as well as your exercise regime. It has a whopping 7-day battery life and it is available today in physical and online stores.

The Fitbit Charge HR costs $149 USD. The HR comes from heart rate, because aside from all the features that the Base Charge has, it also has a basic heart rate monitor sensor. The extra sensor will drain your battery, so the Fitbit Charge HR has a standard 5-day battery life. It will become available at the beginning of next year.

The most expensive Fitbit out of the three new Fitbit fitness trackers launched yesterday is the new Fitbit Surge. It will cost $249 USD and it has the same sensors as the Charge HR. It comes with music controls, a low-powered GPS, OLED touchscreen display, text and call notifications and a 7-day battery life. This, as the Charge HR, will become available to the public at the beginning of 2015.

James Park, co-founder and CEO of Fitbit, had this to say about the new Fitbit fitness trackers released yesterday and about the company’s mission:

Our mission has always been to deliver innovation through exceptional, wearable design in a way that empowers consumers with greater knowledge of their overall health. That being said, we understand that everyone’s approach to fitness is different. With the addition of these new products, Fitbit offers the widest variety of trackers-at affordable prices across all mobile platforms-ensuring that everyone can find the right fit for their lifestyle and their goals.