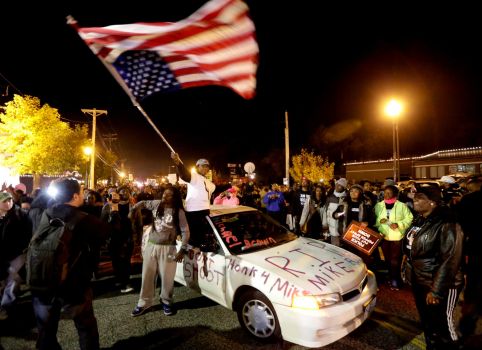 Authorities expect protests to continue on Sunday after peaceful daytime demonstrations and nighttime police standoffs, as demonstrators are still gathering to mourn the loss of Michael Brown, the unarmed black teenager shot by a police officer in August.

Participants at the four-day Ferguson October summit will be trained by organizers in nonviolent civil disobedience tactics. Trainings will take place on Sunday morning.

Taking their cues from North Carolina Moral Monday demonstrations, local and visiting clergy members will take part in a “direct action” on Monday, which will take place in Ferguson as well as other spots in St. Louis. Details will only be released shortly before protests commence, so that law enforcement officers aren’t tipped off.

“We still are knee deep in this situation. We have not packed up our bags, we have not gone home. This is not a fly-by-night moment. This is not a made-for-TV revolution. This is real people standing up to a real problem and saying, ‘We ain’t taking it no more”

On Saturday, an estimated 3,000 participants marched down the streets of St. Louis, after spirits were reignited by the fatal shooting of another 18-year-old African American by a white police officer last week.

The riots following Michael Brown’s death forced Missouri Gov. Jay Nixon to summon the National Guard in order to tone down the violent protests that were taking place all over Ferguson.

Friday’s protests began with a march outside the St. Louis County prosecutor’s office, where demonstrators renewed their calls for prosecutor McCulloch to charge officer Darren Wilson. A grand jury is still reviewing the evidence in Brown’s case, while the Justice Department is conducting a civil rights investigation.

Dotson also said that police presence will be increased for the Monday night game, when the St. Louis Rams will host the San Francisco 49ers. Organizers expect anywhere between 6,000 and 10,000 participants.

Since Michael Brown’s death in August, three other African American men were fatally shot in the St. Louis area, the latest of which occurred on Wednesday, as a St. Louis officer moonlighting as a security agent shot 17 rounds after the 18-year-old opened fire. The victim’s parents insist that the black teenager was unarmed and many protesters echoed those doubts.