You are here: Home / National News / Louisiana Candidates for U.S. Senate Spar over Medicare and Obamacare 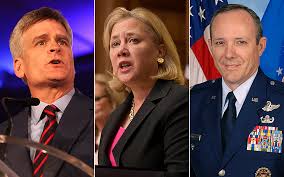 The three candidates currently in the running for Louisiana’s race for U.S. Senate entered their first debate on Tuesday night, as shots over Obamacare vs. Medicare were traded.

Both Republicans rallied against Obamacare, better known as the Affordable Care Act.

Mr. Cassidy accused Mrs. Landrieu of casting the deciding vote in the Senate, when the landmark healthcare law was ultimately passed. He also held up a piece of paper which, as he claimed, showed a 66 percent rate increase planned to take effect next year.

“Clearly this is the Unaffordable Care Act,”

Mr. Mannes, running as Mr. Cassidy’s party-backed conservative alternative, claimed that Obamacare was an abomination that must be eliminated from the health system.

According to Louisiana election law, the candidates will face each other on the 4th of November in open election, after which, the two with the most votes advanced to the runoff on the 6th of December if neither candidate gathers 50 percent of the vote.

Recent polls suggest that none of the candidates will reach the required 50 percent. Polls also give Mr. Cassidy the advantage over Ms. Landrieu (47 to 41 percent).

Although Ms. Landrieu has always faced difficult elections, especially since running in conservative-leaning Louisiana, this year’s race has proven the most difficult. She will face voters who are extremely dissatisfied with Mr. Obama and the policies that she or the Democratic majority have supported in the Senate.

This debate, which took place at Centenary College in Shreveport, was the first of a series of three where the candidates will face each other on television.

Both Mrs. Landrieu and Mr. Maness accused Mr. Cassidy of dodging debates (especially since the congressman only agreed to two debates before the 4th of November).

On Tuesday, Mrs. Landrieu, who has become one of the most endangered Senate Democrats in November’s elections, took a few swipes at congressman Cassidy as soon as the debate was open.

“They’re doing whatever they can to get Senator Landrieu re-elected, because Mayor Bloomberg likes her, because she agrees to restrictions upon your Second Amendment rights. Now the NRA has third-party money coming from me, but at least you know who they are: They’re the NRA.”

Cassidy said during the debate.

“My opponent has no plan, as you just heard,”