You are here: Home / National News / Students Involved in Pumpkin Festival Riots to be Held Accountable 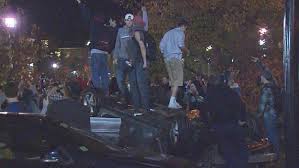 The president of Keene State College warned that any student involved in the Pumpkin Festival Riots on Saturday will be held accountable. Anne Huot, the Keene State President, shared her disappointment and sadness over the events that occurred on Saturday, when students and other participants at the Pumpkin festival tipped over cars, tore down lampposts and threw bottles and cans around.

“We are mindful that Keene State students played a part in this behavior and we intend to hold those individuals accountable for their actions,”

Huot told reporters when asked about the student’s involvement in Saturday’s events.

“We deplore the actions of those whose only purpose was to cause mayhem. And we are grateful for the swift response of law enforcement and first responders who worked to minimize injuries and damage.”

According to Huot, the outcome of Saturday’s event had been “predetermined a year ago”, fearing that the Pumpkin Festival would remain a destination for such raucous behavior if meaningful changes aren’t attempted.

On Sunday, reporters found cars that had been flipped over, smashed out windows or popped tires in many vehicles.

Saturday’s afternoon party went out of control as riot crews appeared in Keene, New Hampshire. Around 10 PM, riots rekindled and participants were out of control, lighting fires and forcing police officers to unload tear gas into another crowd.

Earlier on Saturday afternoon, Keene police also had to fire pepper balls into crowds gathered around the Butler Court so as to diffuse the riot.

a Keene State College statement said during the riots.

“Over the past few days, a large number of out-of-town visitors have come to Keene for the Keene Pumpkin Festival. […]gatherings associated with the Keene Pumpkin Festival escalated at a number of locations around the city. […] Incidents in the city, not on Keene State’s campus, subsided overnight but began to increase again by mid-afternoon on Saturday. One large assembly on Winchester Street drew multiple responses from Keene Police on Saturday afternoon. The College is not able to report on injuries or arrests — these incidents do involve Keene State students, and also visitors to Keene.”