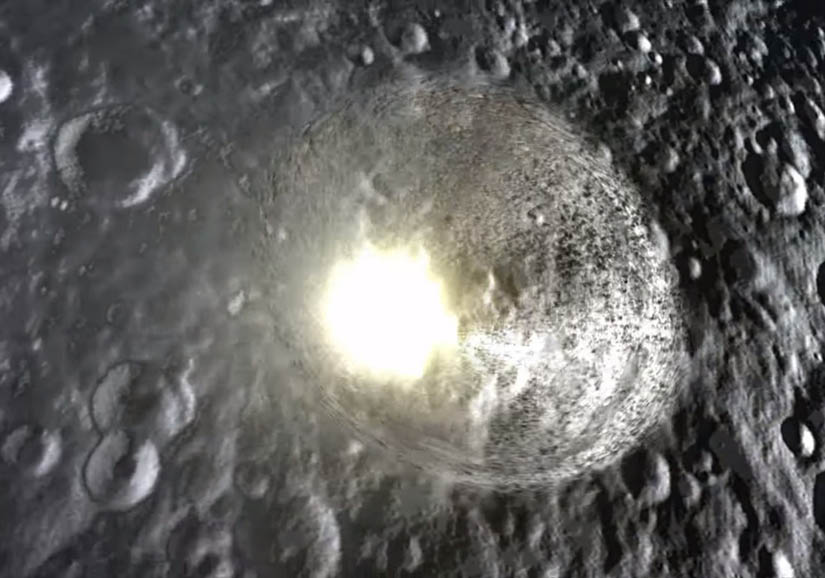 Earlier in 2014, after completing its mission, the NASA LADEE moon orbiter was intentionally crashed into the lunar surface. Now, several months later, the NASA Lunar Reconnaissance Orbiter was sent to take photographs of the LADEE probe final resting place, on the moon’s far side. A small crater is all that remains.

The Lunar Atmosphere and Dust Environment Explorer, LADEE, was launched in September of 2013 and spent 7 months orbiting the moon’s equator. Its mission: to study the lunar exosphere and the role that lunar dust plays in this thin lunar atmosphere.

As its mission was coming to a close, managers prepared for the final destination of LADEE and planned the series of thruster burns meant to take it lower and lower in altitude. On April 18th, NASA lost contact with the orbiter, which meant only that the probe had met its kamikaze end.

The decision of crashing the probe into the far-side of the moon was no mistake, as managers were attempting to avoid damage to the historic Apollo landing sites on the near-side of the moon. Bits of spacecraft are already disposed of on the moon’s far-side.

However, until today, there wasn’t any information on the exact landing site of LADEE.

Mark Robinson, LROC primal investigator said, when announcing that the tiny impact crater had been pinpointed by the LRO’s Narrow Angle Camera.

“As it turns (out) there were several small surface changes found in the predicted area of the impact, the biggest and most distinctive was within 968 feet (295 meters) of the spot estimated by the LADEE operations team. What fun!”

LADEE was traveling slowly in comparison to asteroids or meteoroids impacting the moon, at “only” 3,800 miles per hour. The “slow” speed combined with the low mass and density of the spacecraft left a crater barely registering in LROC’s image resolution.

“I’m happy that the LROC team was able to confirm the LADEE impact point. It really helps the LADEE team to get closure and know exactly where the product of their hard work wound up.”

Next to the crater, bright impact ejecta was also spotted, oriented in a northwesterly direction, consistent with LADEE’s final orbit trajectory.