You are here: Home / National News / Indiana Aid Worker Threatened by ISIS is Afraid to Die 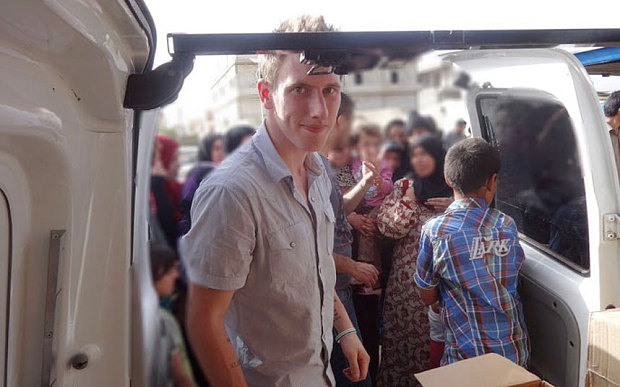 According to his parents’ statement, the Indiana aid worker threatened with beheading by the Islamic State group (ISIS) said in a June letter that he’s afraid to die and is saddened by the pain his captivity must be causing his family. Ed and Paula Kassig said their 26-year-old son, Abdul-Rahman Kassig, thanked them for their strength and commitment, but at the same time he appeared to try to prepare them for his death.

“I am obviously pretty scared to die but the hardest part is not knowing, wondering, hoping, and wondering if I should even hope at all,” Kassig said in the letter, according to his parents. “I am very sad that all this has happened and for what all of you back home are going through. If I do die, I figure that at least you and I can seek refuge and comfort in knowing that I went out as a result of trying to alleviate suffering and helping those in need.”

Kassig is seen at the end of the video that emerged online a couple of days ago, after British captive Alan Henning had been killed, as the black clad militant says it is right that ISIS attacks Americans as long as American bomb ISIS targets in Iraq and Syria.

In return, his parents also released a video message for him Saturday: “Know that we love you, and our hearts ache for you to be granted your freedom so we can hug you again and then set you free to continue the life you have chosen, the life of service to those in greatest need,” said Paula Kassig. “We implore those who are holding you to show mercy and use their power to let you go.”

The Islamic State group took Kassig captive Oct. 1, 2013, in Syria, where he was providing aid for refugees fleeing that country’s civil war. According to a former Islamic State hostage, Kassig voluntarily converted to Islam sometime between his capture and December 2013, the Kassigs said. He was known as Peter Kassig before his conversion.

Kassig’s June letter to his parents also stated: “In terms of my faith, I pray every day and I am not angry about my situation in that sense. I am in a dogmatically complicated situation here, but I am at peace with my belief.”