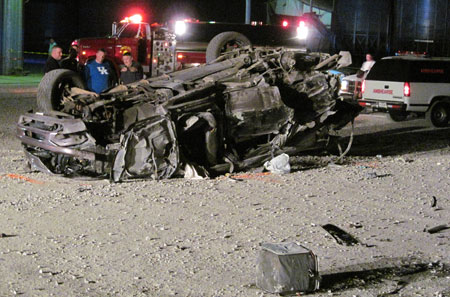 In Illinois 3 die after SUV strikes train at a railroad crossing. The three people whom are believed to be related were killed after their SUV slammed into a train at a crossing.

Bruce Bower, Fayette county coroner, revealed to the press that the woman, a young boy and a small girl were part of the same family. The crash took place 70 miles from St. Louis, in Vandalia. He pronounced the three people dead at the scene at 7:16 p.m.

Bower didn’t release any more details about the crash and its victims, but updates of the age of the people involved surfaced. It appears that the oldest of the victims was an 18-year-old woman; the younger girl was 10 and the boy was 13.

The three people weren’t the only ones in the SUV that hit the train; two more people are said to have been involved in the car crash, but they were still alive when the ambulance came so they were airlifted to the nearby hospital. As of now, there is no news about their condition.

The accident took place close to where people had gathered to watch the Halloween parade. 3 die after SUV strikes train, just minutes before the city’s Halloween parade was about to begin.  The police have no idea how the accident could have taken place, as the warning signals from the railroad crossing were working properly.

It was revealed that the car was in between the crossing gates at the moment the train struck it. The crossing is large and it has two sets of tracks.

It was confirmed that 3 die after SUV strikes train, and that there were no pedestrians involved in the accident. All of the victims were inside the car when the accident happened.

The victims’ bodies were taken to St. Anthony’s Memorial Hospital in Effingham, where an autopsy is scheduled to take place later today.

Also later today, we should expect identity of the victims to be made publish. More information about the crash is expected to be released today.