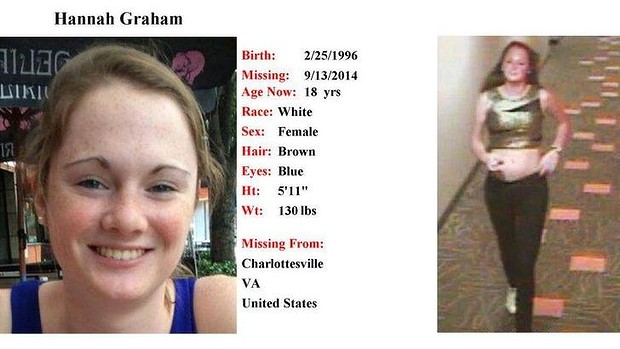 Police searches have unveiled human remains on Saturday and officers fear they may belong to Hannah Graham, the University of Virginia sophomore who went missing on September 13th. More forensic evidence is needed to prove that the remains are indeed those of Hannah Graham’s, however, Charlottesville Police Chief, Timothy Longo, already informed Graham’s parents of preliminary findings.

Volunteer searches for Graham have also been cancelled on Sunday so that the Albemarle County Police Department can focus all their attention to the new found evidence.

The remains were found by a search team for the Chesterfield County Sheriff’s Office on an abandoned property in southern Albemarle (roughly the same area where the remains of Morgan Harrington, the 20-year-old Virginia Tech student, were found three months after her disappearance in 2009).

“Countless hours, thousands of hours, have been spent by literally hundreds of law enforcement, civilian volunteers in an effort to find Hannah. We think perhaps today proved their worth.”

Longo said, addressing the volunteer search parties that have been held since Graham went missing.

The suspect in Hannah’s case, Jesse Leroy Matthew Jr., 32, is being held at an Albemarle Charlottesville Regional Jail, awaiting his preliminary hearing which is set for December 4th. He is charged with abduction with intent to defile.

The Albemarle County Police department will take over the investigation now, and Steve Sellers, County Police Chief urged anyone who may have witnessed suspicious activity in the area to come forward and contact the police.

“Today’s discovery is a significant development and we have a great deal of work ahead of us. We cannot and we will not jump to any conclusions regarding today’s discovery, so I ask for the public’s patience as we move forward and pursue what is now a new ongoing death investigation.”

On Saturday afternoon, police officers closed the road leading to the site where the remains were discovered.

The night that she vanished, Graham is shown in surveillance videos walking home after attending two parties at off-campus housing units. She is seen walking unsteadily and even running, until she appears in the presence of Matthew. According to police officers, there was no reason to believe that Hannah and Matthew had known each other before the night in question.