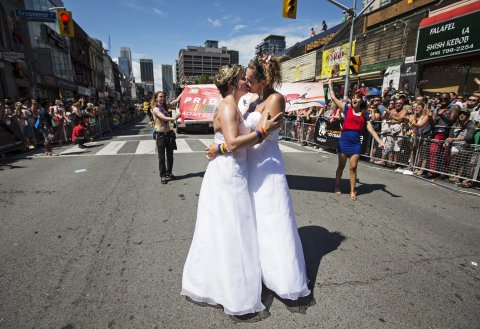 While the Vatican is reviewing its approach on the homosexual community, the Supreme Court’s denial of appeals coming from five states has caused a flurry of same-sex marriage last week, as marriage rights expanded to include gay couples. Shortly after the Supreme Court’s decision, another federal court in the West decided to strike down bans in states such as Idaho or Nevada, so that all over the nation, same-sex marriage is becoming official.

In Alaska, a federal appeals court has been asked for a stay after a previous court ruling declared the gay marriage ban unconstitutional. The state is still hoping to be able to prevent gay marriages before Thursday, as officials will appeal the court’s decision. It seems unlikely, though, especially since the U.S> District Court Judge, Timothy Burgess, already denied the same request on Tuesday. Statewide, countless gay couples already began applying for marriage licenses on Monday.

The situation is similar in Florida, where Attorney General Pam Bondi is now expecting the state’s highest court to declare the state’s ban on gay marriage constitutional (Bondi believes that it is her duty to defend the ban on gay marriage). However, even here, judges already declared the ban on same-sex marriage unconstitutional, so it would seem that the 3rd District Court of Appeal in Miami would also support previous rulings.

Gay couples were already celebrating in Idaho, where county clerks started issuing marriage licenses at 9 AM in the morning. Leaders announced that the fight was not over, especially in a state as conservative as Idaho. Gov. C.L. “Butch” Otter insisted that he would defend the state’s constitution, which clearly defines marriage as occurring between a man and a woman.

A federal court has also been asked by the American Civil Liberties Union to order Kansas to allow same-sex couples to be joined in marriage, where a filing by the group in the U.S. District Court in Kansas City is likely to prevail.

Other states are also confronting the same difficulties: in Nevada, gay marriage opponents have asked the 9th Circuit Court of Appeals to address the situation of historic importance, while in North Carolina, a state magistrate that had refused to marry two men (despite the end of the state’s gay marriage ban) will not face disciplinary actions. Even in South Carolina, a federal lawsuit has been filed gain on Wednesday, asking a judge to rule on the state’s ban on gay marriage and declare it unconstitutional.