You are here: Home / Tech & Science / Comet Flies by Mars in Once-in-a-Lifetime Event 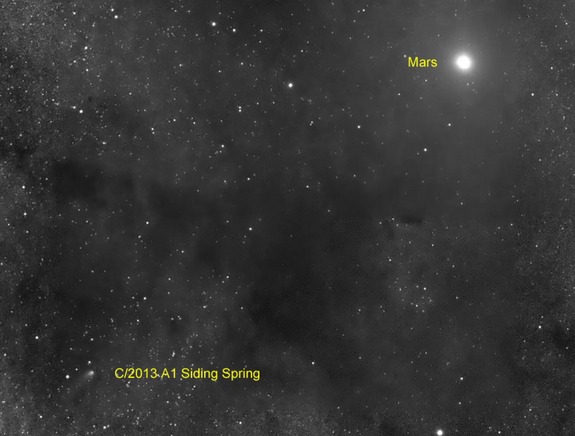 During an extremely rare fly-by, comet Siding Spring zoomed by Mars on October 19th in an event that scientists bill as being once-in-a-lifetime. The event could help astronomers better understand what occurred during the earliest days of our solar system.

Siding Spring flew as close as 87,000 miles to the Martian surface at 2:27 PM EDT-approximately one third of the distance between Earth and the moon. NASA officials revealed that, at the time of its closest point to the Red Planet, the comet flew by at approximately 126,000 mph.

NASA specialists had scheduled all available spacecrafts currently operating on Mars or around it to observe the unique encounter of celestial bodies, hoping that astronomers would learn more about comet behavior and composition

“We cannot plan missions to comets like this — this one was discovered less than two years ago. It is incredible luck that it is saving us the trouble of going to it, as it flies by Mars, which is being explored by seven active robots.”

The camera team member for NASA’s Curiosity and Opportunity Rovers was thrilled at Sunday’s event:

“So this very much is a once-in-a-lifetime event, for us and our rovers.”

Other astronomers have likened Sunday’s fly-by to the epic impact of Comet Shoemaker-Levy 9 with Jupiter, which occurred in 1994. Planetary scientist David Grinspoon tracked the comet in real time for a live webcast by the Slooh Community Observatory.

“It’s very rare. And it’s certainly the first time that I can think of that I’ve seen it happen with Mars.”

However, what excites scientists the most is the secrets that such comets hide about the early stages of the solar system. They are time capsules, so to speak, which were left over from the formation of our solar system 4.6 billion years ago, and as such, they can be studied. Scientists can determine the prevailing conditions at the time when planets were first coming together.

Comer Siding Spring has a core between 0.5 and 5 miles wide and has the unique trait that it has never been baked by the sun: this means that it most likely looks the way it did 4.6 billion years ago.

“These are the events that inspire our imaginations and remind us why we must continue investing in planetary science and NASA’s primary mission of space exploration.”