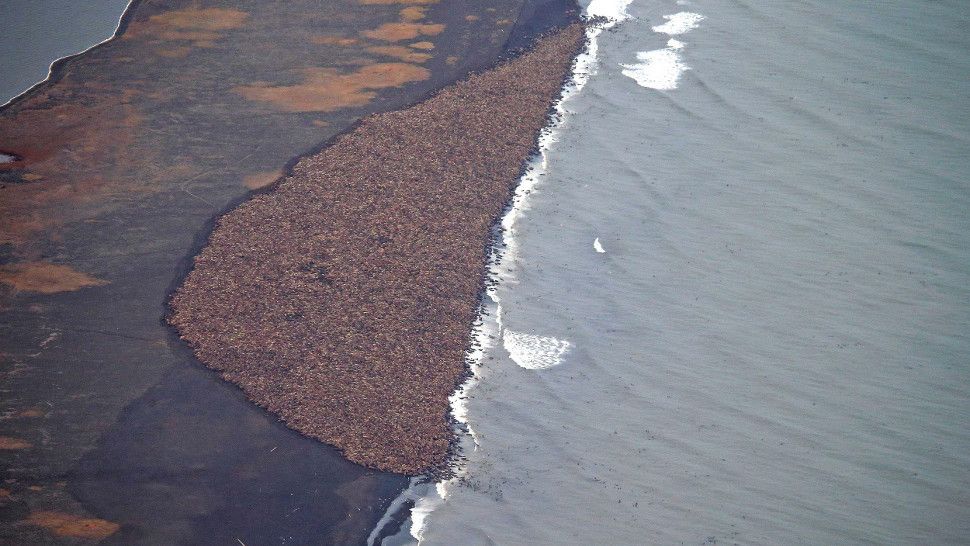 Around 35,000 walruses had to retreat to the Alaska shoreline to chill, as the Arctic Sea keeps melting, federal agencies report. Without any ice to cling on to while having a rest, they resorted to the dramatic choice.

The National Oceanic and Atmospheric Administration photographed the gigantic walrus group resting on a shore 5 miles north of Point Lay, an Inupiat Eskimo village. The area is 700 miles northwest of Anchorage. The group was first noticed on September 13, during the annual survey of marine mammals conducted by the Bureau of Ocean Energy Management.

Around 50 carcasses have been noticed on the shore. US Fish and Wildlife Service will investigate the death cause. Stampedes are likely to occur when such a large group of animals occupies a reduced area and is one probable cause of death.

The behavior is a clear proof of climate change. Usually, the animals spend their winter time in the Bering Sea. Ice blocks floating on the sea are like houses for walruses. They use the platforms to move around while fishing, they rest there and females give birth on them. While seals can swim for much longer periods of time, walruses are not capable of prolonged swimming and have to rest between sessions. Walruses use their impressive tusks to climb on the ice sheet.

The walrus can weigh around 2,700 pounds and reaches lengths of up to 10 feet. The total Pacific walrus population is estimated at 200,000 to 250,000, according to US Fish and Wildlife Service.

“It’s another remarkable sign of the dramatic environmental conditions changing as the result of sea ice loss,” Margaret Williams from the World Widlife Fund Arctic Program told The Telegraph.

“The walruses are telling us what the polar bears have told us and what many indigenous people have told us in the high Arctic, and that is that the Arctic environment is changing extremely rapidly and it is time for the rest of the world to take notice and also to take action to address the root causes of climate change,” she added.

Recent reports claim that during this summer the Arctic sea ice reached its sixth lowest level since 1979.