You are here: Home / Tech & Science / Satellite Images Show How the Aral Sea Dried Up 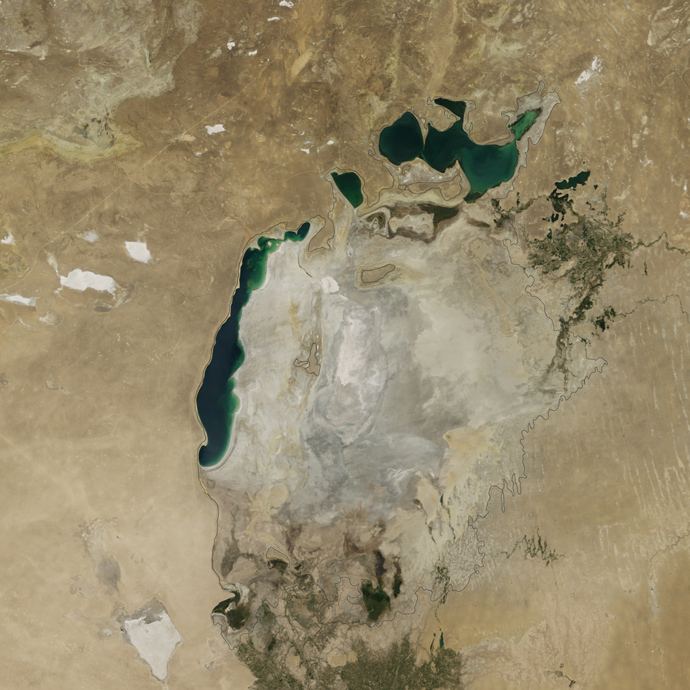 Aral is Turkish for island, so this would make it the Sea of Islands. While decades ago the Aral Sea was the fourth largest lake in the world by surface, now it shrank close to its disappearance. The lake used to cover large areas of Northern Uzbekistan and Southern Kazakhstan, but now the Uzbek part of the lake has completely dried up. In 1960, the total surface of the sea was estimated at around 26,000 square miles. In 1998 it dropped to just 11,000 square miles, but the numbers decreased even more dramatically in the last six years.

In 2000, NASA started retrieving images of the Aral Sea from its Moderate Resolution Imaging Spectroradiometer (MODIS) on its satellite orbiting the Earth. Progressive images taken by NASA over the course of 14 years show how the largest part of the Aral Sea has stunningly retreated. The pace of the process strikes everyone, as it clearly shows the impact of large scale human activities.

The Soviet Union decided to use the main rivers that fed the Aral Sea, Amu Darya and Syr Darya, as the main suppliers for large scale irrigation projects in the 1960s. The development of cotton fields required massive amounts of water. The authorities soon witnessed the first signs of shrinkage, but the project was not discontinued. What happened with the Aral Sea is regularly called “one of the planet’s worst environmental disasters.”

In 1987, the remains of the Aral Sea split in two, forming the North Aral and the South Aral seas. A smaller lake between them reminded of what once was an uninterrupted water surface. The South Aral Sea is now just a small strip of water in the western part of the sea basin.

The Aral Sea is surrounded by low-income populations who have been deeply affected by its disappearance. As most of them relied on fishing, their problems are now worse. Surface shrinkage was not the only issue for the local populations. Because of the intensive agricultural production based on pesticides, the pollution and salinity levels reached unprecedented levels even before most of the water evaporated. The chemicals made the sea water inhospitable for most fish species.

A water dam project funded by the World Bank was completed in 2005. The aim was to preserve and recover much of what is now the North Aral Sea in Kazakhstan. So far, the objectives have been met, as the water level raised by 39 feet and fishing is once again possible. But the whole recovery of what once was one of the world’s largest lakes is close to impossible. Will this serve as an example for other areas?