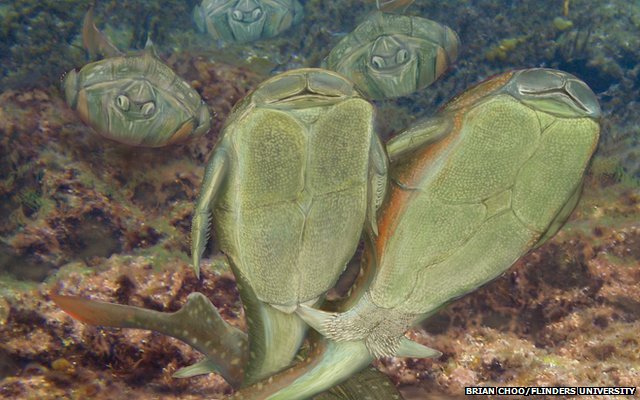 The first shag in history took place 385 million years ago, British researchers discovered. What is now the main form of reproduction in mammals was first tried by a species of fish called Microbrachius dicki. The 3-inch long bony fish lived in ancient lakes in areas that are now part of Scotland, Estonia and China.

Prof. John Long, a paleontologist from Flinders University, Australia, is the lead author of the academic paper explaining how the first sexual intercourse took place. Long explained that we owe much more than the act of sex as we know it to the placoderms, the group to which microbrachius belongs.

So how did they do it? The male fish had L shaped genitalia called claspers that he used to transfer sperm to the female. On the other end, the female developed bony structures to keep the male organ in place during mating. Moreover, they used their little arms during the process. With this biological structure, they only had one way to copulate and that was sideways.

“The little arms are very useful to link the male and female together, so the male can get this large L-shaped sexual organ into position to dock with the female’s genital plates, which are very rough like cheese graters.”

To put it simply, Prof. Long explains that “they act like Velcro, locking the male organ into position to transfer sperm.”

Now researchers have a better understanding of how the fish used its arms. Microbrachius actually means ‘little arms’, but for centuries researchers could not solve the mystery.

Long observed the sexual capacity of the fish while looking at a fossilized bone located in Tallin, Estonia. His intuition was followed by a research involving scientists from China, Estonia, Australia, Britain and Sweden. They all investigated various fossils of the fish from the local museums.

The prehistoric fish was the first to use the progressive copulation method. However, it did not last for long, as aquatic animals soon returned to spawning. Females and males release eggs and sperm in the water, where fertilization takes place. It took a long time for marine species like sharks to once again use copulation as a fertilization method.