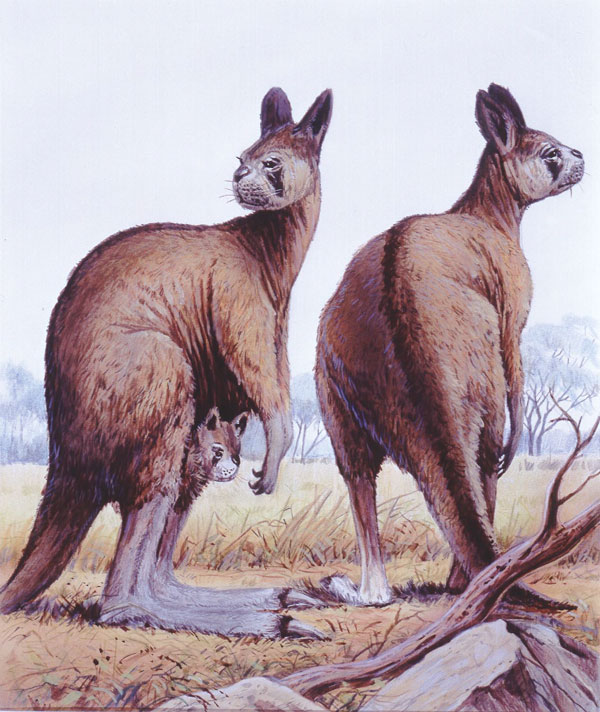 Brown University researchers have found that the ancestors of modern-day kangaroos, giant marsupials with rabbit-like faces, might have walked upright on two feet. The study claims that considering the bone structure, the earlier kangaroos were not hopping. The research involved a biochemical and statistical analysis of fossil bones on a group of extinct kangaroo ancestors.

The ancient kangaroos, called sthnurines, lived in Australia 13 million years ago until 30,000 years ago. The animals comprised several species the largest of which, Procoptodon Goliah, weighed in at 530 pounds, standing 6 and ½ feet tall, and having a length of 10 feet.

The study mentioned the anatomical differences that allowed one species to hop and kept it from being able to perform bipedal movement. Sthenurines, they wrote, were poorly equipped for hopping and walked in a manner much like humans.

“We’ve known for a while that sthenurines were different in their dietary behaviour,” said lead author Prof Christine Janis, a paleontologist at Brown University in the US, the lead researcher for this study. “But the idea that they might have used a different kind of locomotion has not been thought about.”

Janis and her colleagues traveled to about half a dozen museums around the world, measuring the bones of 140 kangaroos, including sthenurine and wallaby skeletons.

Today’s kangaroos hop at fast speeds and move about on all fours for slow speed travel that requires a flexible backbone, sturdy tail, and hands that can support their body weight. Researchers found that Sthenurines do not have any of those attributes making them anatomically ill suited for hopping but well suited for bearing weight on one leg at a time.

The largest kangaroo (Procoptodon goliah) weighed an estimated 529 pounds, or about three times the weight of modern day kangaroos. The enormous size of the species may have prevented them from hopping, and analyses show that their bodies were configured differently than their modern ancestors.

“Hopping is a tricky gait, and modern kangaroos are near the limit, in terms of size,” Janis said. “It could be that having walking to fall back on is what allowed sthenurines to get so big.

This is just one of many cases of humans believing that extinct animals must have moved and acted like their modern-day relatives,” Professor Janis said.