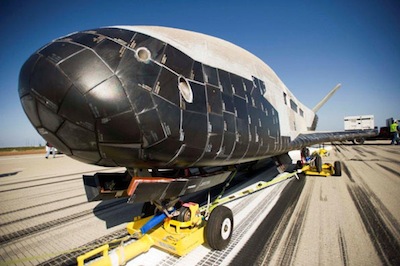 The U.S. Air Force X-37B spacecraft completed its third operation on Friday after streaking through the atmosphere over the pacific Ocean and landing at the Vanderberg Air Force Base. It has successfully spent 675 days in orbit. X-37B is the American unmanned spacecraft belonging to a top secret operation. Scientists believe that it will return to Earth somewhere around this week.

The spacecraft spends around 22 months in orbit. The purpose for its otherworldly expeditions are still unknown. The first launch of X-37B was in April 2010. The spacecraft returned from its secretive mission in December 2010.

The military has yet to disclose any information regarding the elusive air force spacecraft, but one thing is certain: its mission is extremely important. It is very probable that the space plane, known as the Orbital Test vehicle, collects information from its flights.

On Tuesday, The Federal Aviation Administration’s website issued a notice informing that the air space in the vicinity of Vanderberg Air Force Base will be closed. This decision was taken because the space aircraft is scheduled to arrive soon. The administration has yet to inform authorities about any specific landing time of the Orbital Test Vehicle. According to the administration, the weather conditions will determine the exact time of landing.

In terms of appearance, the aircraft looks like a tiny space shuttle. When it was first launched, in April 2010, the administration announced that it would be traveling around the Earth for several months. It orbited for 9 months.

Rumors also say that the shuttle’s main goal is to test a mysterious weapon or regulatory spy satellite. There are also discussions about how the aircraft was designed to attack the ‘enemies’. If the goals of the program are met, this could mean a great leap forward and a successful creation of Air Force scientists.

“The 30th Space Wing and our mission partners, Air Force Rapid Capabilities Office, Boeing, and our base support contractors, have put countless hours of hard work into preparing for this landing and today we were able to see the culmination of that dedication,” – Col. Keith Balts, Space Wing Commander