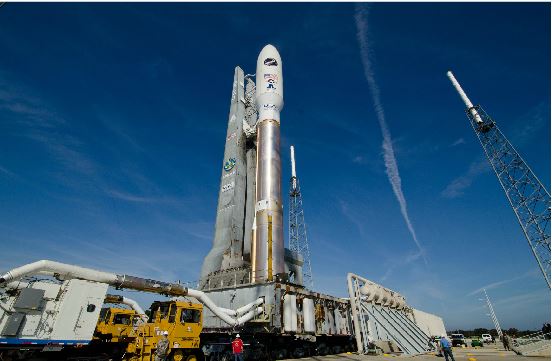 A mysterious U.S. Air Force space plane, the X-37B, is planned to return to earth after spending more than 22 months in orbit on a mission the military can’t reveal much of. The X-37B will be landing at the Vandenberg Air Force Base in California, however, an exact time for the landing hasn’t been released.

A notice to aviators and mariners posted on the Federal Aviation Administration’s website announced that the airspace around the Vandenberg Air Force Base, located in Southern California, would be closed between 8AM and 5 PM on Tuesday.

The aircraft looks like a small space shuttle and was sent into orbit on the 11th of December 2012. When it was launched, the Air Force announced that the X-37B would orbit the Earth for approximately nine months. According to the Air Force’s description of the plane, the X-37B:

“is designed to demonstrate reusable spacecraft technologies for America’s future in space and operating experiments which can be returned to, and examined, on Earth.”

Speculations over the aircraft’s uses are gathering, especially since the military won’t reveal much information about the purposes of X-37B, speculations that include testing of a secret space weapon or even spying activities. On the other hand, the military described the plane’s objectives as follows:

This isn’t the first flight of X-37B. The Air Force owns two different X-37B orbiters, one of which returned from a mission on June 11th 2012, after orbiting for 469 days. The current mission is being performed by the first X-37B, which has already spent 224 days in orbit and was refurbished after its April 2010 launch. And as the Air Force suggests, this mission will surely not be the last:

“Officials anticipate multiple missions will be required to satisfy the test program objectives, but the exact number of missions has not been determined,”

a statement made by the Air Force said.

The X-37B orbiter is 29 feet, 3 inches long and 9 feet, 6 inches high. Its wingspan is 14 feet and 11 inches and weighs around 5 tons. Alliance Atlas V rockets are used to launch it into space.