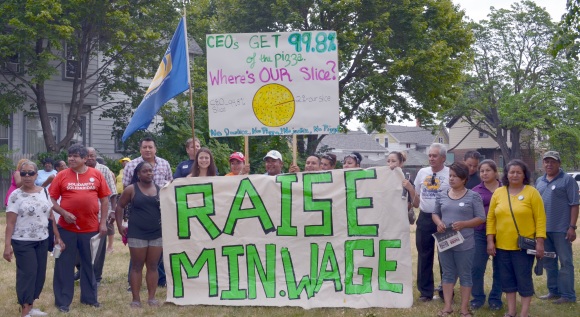 Curiously enough, the complaints that have been filed not only by the liberal Wisconsin Jobs Now but also by 100 workers and come one month and a half before the November elections, are very likely to succeed. Gov. Walker, Republican, has been opposed to any proposed increase in the Wisconsin’s minimum wage (that is currently $ 7.25 an hour).

However, his Democratic opponent, Burke, actually favors an increase.

The clause that workers have decided to use is the law that requires that the state’s minimum wage be no less than a living wage. And as a living wage is also defined by the law as being one that allows reasonable comfort, physical well-being, decency as well as moral well-being, workers believe that the $7.25 an hour don’t fit that description.

The governor’s administration is permitted, under the same law, to analyze the effect that an increase in minimum wage would have on the overall state economy as well as on the availability of entry-level fobs.

Wisconsin Jobs Now and workers called on Walker’s labor department to determine if the living wage in Wisconsin should be set higher. During the conference, many workers cried out claiming that they’ve all gone through humiliating experiences when they realized that they didn’t have enough money to pay for the simplest and most basic of needs.

“My income is not enough to provide for myself and my family,”

In compliance with the law, Walker and his administration have 20 days (until the 14th of October) to revise the data and respond to the complaint.

“My goal, I’ve said all along, is to find jobs that pay two or three times the minimum wage. People can have tactics that try to figure out how we are going to argue what the floor is. I want to argue about how high we can push the ceiling to help people get higher pay.”

Walker noted during an event honoring veterans at the War Memorial Center.

John Dipko, of the Workforce Development, confirmed that the agency’s Division of Equal Rights had also received a copy of the complaint and that it would respond as soon as possible.

Walker explains that he and all Republicans opposing the increase of minimum wage do so because teenagers are the ones benefitting from minimum wage jobs, which would be eliminated if it were to be raised.