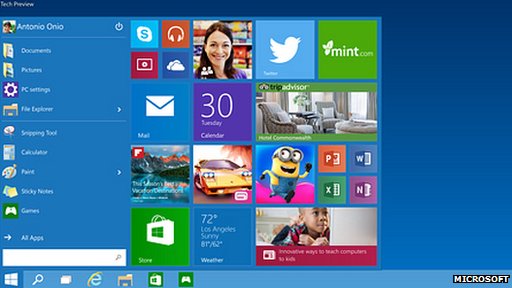 During an event in San Francisco, Microsoft has just announced details about its Windows 10 operating system, software that will be running on devices such as phones, tablets, PC’s and even Xbox consoles.

The new operating system also marks the revival of the Start Menu, which had been removed from Win8. Apart from how we already know the Start menu (offering a list of useful applications the user prefers) it will also bring up resizable tiles that look like those featured on the interface of Windows 8 PC’s and tablets. These provide a quick notification overview, from email to Facebook messages or weather forecast changes.

What the company attempted was to create a software that would be familiar not just to Windows 8 users but also to those still using Windows 7. Depending on the type of device it is installed on, the operating system will behave differently. Users will not be required to switch between desktop mode and its touch-focused alternative from now on.

This new operating system, however, seems to be a critical choice for Microsoft, after Windows 8 had received a lot of criticism for being too different than its predecessor. Some organizations did not introduce it precisely because of this.

Initially, Windows 8 lacked a start button and when Microsoft finally introduced one, it could only provide access to the system control panel and other functions or it switched to a touch-centric tiled interface.

“It’s extremely important for Microsoft to get Windows 10 right. Windows 8 is only being offered to employees by about one in five organizations right now. Windows 7 is still the de facto standard for enterprise in the desktop environment.For Microsoft to continue to be able to get the best and latest technology in the hands of the enterprise workforce all over the world it has to have a vehicle to do that – and Windows 10 is its best shot.”

said David Johnson, who watches Microsoft for the consultancy Forrester.

Research conducted by NetMarketshare has revealed that only 13,4% of desktop PC’s run Windows 8 or 8.1. Instead, over 51,2% use Windows 7 and an astonishing 23,9% still run Windows XP, which is no longer supported by Microsoft.

“The Start Menu is perhaps the most important thing that will make the desktop experience familiar to business users, and will help reduce resistance to its installation.”

A technical preview will be available later this week to early adopters.