Every once in a while nature reminds of its true force. The display of power was captured by an Australian taxi driver near Mount Tavurvur in Papua New Guinea. The awe-inspiring video (which you can access from the link below), was captured on camera by a curious vacationer called Phil McNamara. He witnessed a rare explosive eruption at Mount Tavurvur volcano, as well as the powerful sonic wave that followed it. 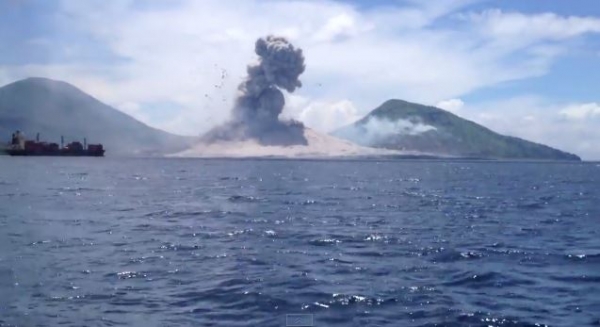 After the explosion, Tavurvur also  belched a dense tower of ash, thousands of feet into the sky, in August 29, when the Australian taxi driver was visiting the area with his wife, Linda McNamara. When they heard about the imminent eruption, the Queensland couple decided to get a closer look.

“I thought I might as well try and capture something you rarely get to see.” – Phil McNamara

He wasn’t expecting to get a front-row view to this spectacle of nature. The couple made a spur of the moment decision to grab a boat and make a video of the eruption. They had no idea they would be hit by the sonic boom that followed. The shock-wave rippled across the earth and sky and finally hit the boat with a huge roar.

Phil McNamara admitted that he, and other tourists had “absolutely crapped themselves” when the shock-wave made contact with the boat. He soon uploaded the video to his Facebook profile, from where it was shared more than 45.000 times.

According to CNN reports, the ash from Tavurvur reached 60.000 feet into the air, and local communities were evacuated. International flights were also re-directed to avoid accidents. At the moment, Mount Tavurvur is one of the most dangerous and active volcanoes in Papua New Guinea. Approximately twenty years ago it destroyed Rabaul, a nearby township, in an explosion, says the Guardian.

Scientists from the United States Geological Survey stated that an earthquake of 5.1 magnitude was also registered at the exact same time of the eruption. The shock-wave also disrupted the white clouds floating over the island.

The New York Daily News isn’t the first website to become interested in this unique video. “I F#$%# Love Science”, one of the most popular online publications about science has also shared the video on Facebook. It didn’t take long for the Papua New Guinea, Mount Tavurvur eruption to go viral. Phil McNamara and his wife are extremely excited that they had the opportunity to witness this.