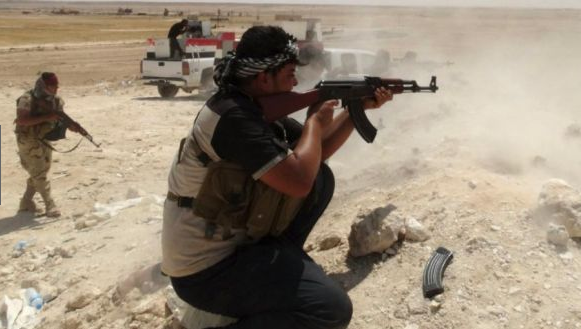 The United States carried out five strikes near Iraq’s Haditha Dam yesterday. Its target were Islamic State insurgents that threatened the Dam. It appears that President Barack Obama called this campaign to finally defeat the jihadist movement. According to the U.S. government, the Islamic State represents a serious threat to the west as well as the Middle East. He added that key Nato allies are ready to back Washington its it actions. The sectarian forces have seized large regions of Iraq and Eastern Syria. They also declared their border-blurring religious caliphate.

According to the leader of pro-Iraqi government paramilitary force in western Iraq, the warplanes that hit former ISIL (Islamic Sate of Iraq and the Levant) has wiped out an entire patrol that was attempting to attack the dam. The Haditha Dam is Iraq’s second largest hydroelectric facility which provides millions of people with water.

“The air strikes were very accurate. There was no collateral damage… If Islamic State had gained control of the dam, many areas of Iraq would have been seriously threatened, even (the capital) Baghdad.: – Sheik Ahmed Abu Risha

Official reports say that the air strike drove most Islamic State fighters away from the dam. Also, in a statement, the US military declared that the air strikes also destroyed 4 IS Humvees, 4 IS armed vehicles and an anti-aircraft artillery. All warplanes left the strike position safely, declared the Pentagon.

This is the first time that Washington reports offensive into Anbar since it began attacks on the Islamic State Forces in north of Iraq, in August. It’s been nearly 11 years since the invasion that toppled Saddam Hussein, and 3 years since US troops withdrew from Iraq, but it seems that the Islamic State keeps drawing Washington back into the fight. Chuck Hagel, US Defense Secretary also mentioned that the air strikes were carried out at the request of Shia Muslim-led central government in Baghdad.

“If the dam would fall into Islamic State’s hands or if that dam would be destroyed, the damage that would cause would be very significant and it would put a significant additional and big risk into the mix in Iraq.” – Mr. Hagel

“We are going to be part of an international coalition, carrying out air strikes in support of work on the ground by Iraqi Troops, Kurdish troops.” – President Barack Obama

Also, this is the first time that cooperation occurs between local Sunni tribes and the Shia-led Iraqi military. The large desert providence situated at the border between Syria, Saudi Arabia and Jordan has been at war with the Capital for the last 6 months. President Obama also ordered air strikes in northern Iraq last month when Kurdish-controlled territory fell to the Islamic State.