In spite of the international promises of supplies being delivered, nurses in Liberia are forced to make do with what they have to protect themselves from infection. As such, they cup used overalls in an attempt at making makeshift head-coverings.

While the World Health Organization has warned involved countries that the 2014 outbreak will become harder and harder to control, it seems that authorities aren’t getting a handle on the situation. Until now, the outbreak has ended the lives of 1,900 people and infected some 3,500. In Nigeria, health officials are now racing against the clock to track down some of the people who have been exposed to the deadly virus of this hemorrhagic fever in recent weeks. 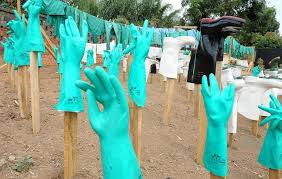 However, the biggest obstacle in the containment of the outbreak is the fact that health professionals aren’t properly protected against the infection. The lack of appropriate protective gear has them at an extreme risk of contacting the illness because of their close contact with contagious patients. Protective gear that has been used around patients must be destroyed after use and as such, a constant flow of new equipment must be ensured for those wards dealing with the deadly virus.

As a result of this problem, 10 percent of the deaths caused by the Ebola virus in these countries are health personnel deaths.

In fear of becoming infected, nurses in Monrovia have resorted to creative alternatives. They have started to cut up old uniforms and binding them around their heads and noses. They only cut holes so they can properly see. The nurse in question didn’t reveal her identity because she isn’t allowed to talk to the media.

Sadly, many such hospitals simply aren’t equipped to deal with a situation of this gravity. Doctors and nurses aren’t provided the necessary hazard suits to ensure their safety and because of the suspension of flights going into the countries affected by the outbreak, no additional equipment can be flown in.

How is it to live in the daily fear of becoming infected with a virus that has a 60-90% mortality rate?