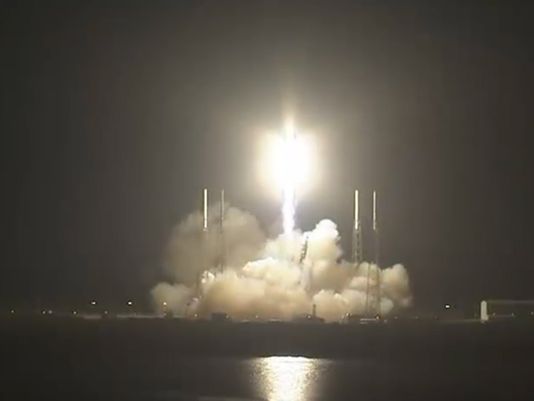 Approximately 5.000 pounds of supplies and experimental gear are making their way to the International Space Station after a successful launch. The SpaceX Falcon 9 rocket and Dragon capsule blastoff, took place at exactly 1:52 a.m. at Cape Canaveral Air Force Station. According to specialists, the Dragon will require approximately two days to chase down the station.

This means that it will arrive at around 7 a.m. Tuesday. The shuttle is being operated by a three-person crew that will snare the free-floating spacecraft with the help of a 58-foot robotic arm. It will then be attached to the docking port where it will stay roughly one month.

The cargo holds precious treasure: 20 mice that are the first mammals to be taken aboard the Dragon. They are part of a rodent research program on ISS. The Dragon will also carry the first 3-D printer in space and a radar instrument for hurricane forecasts. At the moment, SpaceX has 12 resupply missions planned. The current one is the fourth scheduled. SpaceX is currently under a 1.6$ billion NASA contract. The company also secured a 2.6$ billion contract with NASA to launch astronauts to the outpost in a better version of the Dragon, by 2017.

Initially, the launch was scheduled for Saturday, but the weather wasn’t on the crws’s side. This launch was the second attempt, and a successful one at that. Sunday’s forecast wasn’t very optimistic either, but the weather improved to near-perfect conditions within an hour of the instantaneous window at Launch complex 40.

It was quiet for several seconds, until the countdown was made. Then nine Merlin 1D engines ignited with 1.3 million pounds of thrust. The 208-feet rocket started rumbling and made its way over the Atlantic Ocean leaving behind a comet-like streak of flame. After approximately four minutes from the launch, the receding upper stage was still visible under the form of orange light between stars. It took less than 10 minutes for the rocket to separate after liftoff and start generating power through its solar arrays.

SpaceX was also planning to fly the first-stage booster to a soft ocean landing in a test of reusable rocket technology but it wasn’t expecting to recover the booster intact. SpaceX has had some great achievements thus far. This launch was the 13th by a Falcon 9, and SpaceX’s second from the same Cape Pad in two weeks (after the launch of its commercial satellite). This means that it is the company’s first turnaround between launches.

The next launch is scheduled for December, and it will hold precious ISS cargo. There may be one more launch planned for this year, if the Dragon’s launch abort system passes tests. The system is a key component of the system, that will ensure safety for crewed flights.