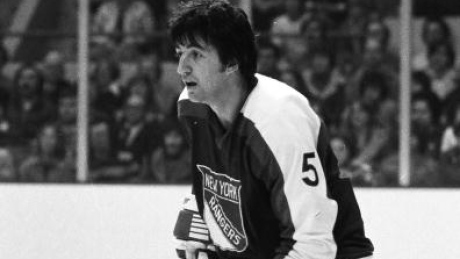 Carol Vadnais, a six-time N.H.L. All-Star who played for Stanley Cup championship teams with both the Montreal Canadiens and the Boston Bruins, died on Sunday in Laval, Quebec, at 68. Vadnais also became a mainstay of the Rangers’ defense in the 1970s and early 1980s. The New York Rangers tweeted: “Our thoughts go out to the family and friends of #NYR alum Carol Vadnais who passed away. Vadnais played 7 seasons with the Rangers.”

The cause of death was supposedly cancer, as Vadnais’s former Canadiens teammate Serge Savard, who visited him at a hospice last week, told the newspaper Le Journal de Montréal.

His daughter, Michele, and two grandchildren survive him.

An “offensive defenseman,” Vadnais led the Rangers’ defensive corps in points during his first season in New York, tallying 20 goals and 30 assists while playing in 64 games. “When I make mistakes, I’m a natural target,” Vadnais told Sports Illustrated in November 1978. “What are the fans going to do, blame a 22-year-old kid? But when we win, they forget the mistakes fast. I’ll tell you, it’s nice hearing cheers for a change.”

The Rangers acquired Vadnais along with Phil Esposito in 1975 in one of the biggest trades in NHL history. New York sent Brad Park, Jean Ratelle and Joe Zanussi to the Bruins. Vadnais twice made the All-Star game while a Ranger.

Vadnais was an assistant coach with the Rangers and a scout for the Canadiens after his playing days, and he sold commercial real estate.

Several of his former teams and teammates have expressed their sorrow at his passing. Former teammate Serge Savard said in an interview with 98.5 FM radio that Vadnais had been his best friend through his entire life and that they had known each other since he was 15 years old.

Looking back on his career in a 2009 interview for the Canadiens’ website, Vadnais said he cherished his Stanley Cup championship ring from the Canadiens over the ring he later received from the Bruins. “I’ve had the ring I won with the Canadiens on my pinkie finger for 40 years,” he said. “I never take it off. I won one with Boston also. I don’t wear it. It’s too big.”