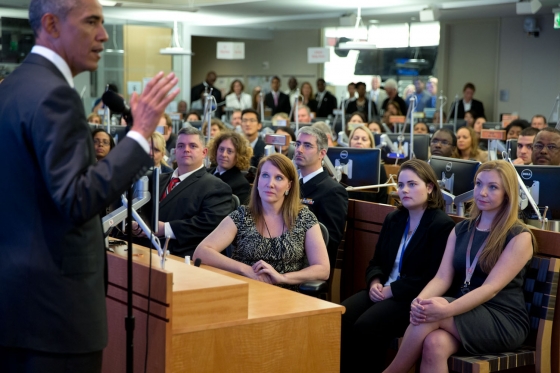 The current Ebola outbreak wreaking havoc in Western African countries has, according to many epidemiologists, only advanced to this stage because of an ineffective and far too slow response. Many experts believe that the outbreak that could have been easily controlled, but, because of hesitations, it has now become an all-out epidemic and will cause the deaths of thousands despite a full international response.

According to President Obama, diseases like Ebola need to be approached not as humanitarian issues, but as security threats.

“We have to change our mindsets and start thinking about biological threats as the security threats that they are — in addition to being humanitarian threats and economic threats,”

President Obama told experts who had assembled at the White House on Friday to discuss international agreements included in the Global Health Security Agenda.

The president told those at the White House on Friday that the current epidemic had underscored what was already known: that diseases occurring in the most remote corners of the world have an immense potential of impacting every world nation since we’ve become so interconnected.

The current Ebola epidemic has claimed the lives of 3,000 people and has infected more than 6,500- far more than all other outbreaks preceding it combined. What’s worse is that, despite international efforts, the epidemic seems to be worsening.

The U.S. President also noted that the current Ebola outbreak wasn’t the first contagious disease to spread across international borders: H1N1, MERS, SARS are just other examples of key epidemiologic moments when the world scrambled to coordinate a response.

“Each time, it’s been harder than it should be to share information and to contain the outbreak. As a result, diseases have spread faster and farther than they should have.”

According to him, such scrambles caused countless lives to be lost. He insisted that the medical talent, knowledge and advanced technologies are all being wasted because the world was unprepared to plan a response and to globally coordinate.

When the Ebola outbreak began in Western Africa, the countries worst affected by the disease were barely recovering from violent civil wars. It’s precisely because of this situation that it spread so fast and so uncontrolled- neither of those countries had any type of organized public health system to counteract the disease.