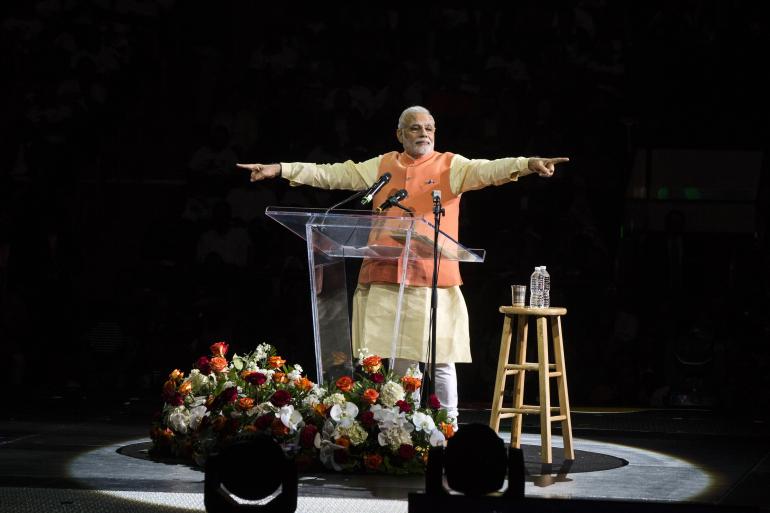 On Sunday, Prime Minister Modi spoke at Madison Square Garden during his first trip to the United States since his May election. Over 19,000 people traveled from all over the U.S. and Canada to witness Mr. Modi, who needs no introduction, speak for the first time in front of an American public.

Mr. Modi addressed the General Assembly of the United Nations and is scheduled to meet United States President Barack Obama on Monday.

The three dozen American elected officials who came to greet Mr. Modi were stunned by the welcome that the Prime Minister received.

Hari Sreenivasan, PBS anchor who was acting as M.C. of the festivities, remarked about the chants.

Neither the MC nor his co-host, the first Indian-American Miss America could hold the audience’s attention. While some enthusiasm was noticed as a traditional folk dance from Gujarat was being performed on stage, all the audience wanted was to see Mr. Modi appear before them.

As a video was shown, reflecting Mr. Modi’s rise to power in India, from being chief minister of Gujarat (his home state) to becoming the prime minister of the largest democracy in the world, the public was ecstatic.

The event Organizers (the Indian American Community Foundation) had printed white Modi T-shirts and handed them out to those attending the event. Families entered Madison Square Garden in everyday attire and saris, but walked out with identical T-shirts.

The best moment of the evening was Mr. Modi’s speech, which didn’t fail to deliver. The Indian Prime Minister described himself as being a man of humble of origins. His desire was to do big things for small people. Modi told his audience that he had vowed to ensure Indian economic growth, to clean up the Ganges River and to help the poor and disadvantaged citizens of the country.

The Indian Prime Minister also promised to ease the process of obtaining Visas for those of Indian descent. Mr. Modi hopes that it will then be easier for the Indian diaspora to use their talents for the benefits of their homeland.

“You have given me a lot of love. This kind of love has never been given to any Indian leader, ever. I’m very grateful to you. And I will repay that loan by forming the India of your dreams.”

Mr. Modi told his audience after roars of applause.

He is believed to be the best Indian prime minister by many, including Suresh Shah, president of the Indo-American Senior Citizen Association of Bergen County. Described as down to the ground, polite and incorruptible, it seems that the Indian Prime Minister had a lot to live up to.