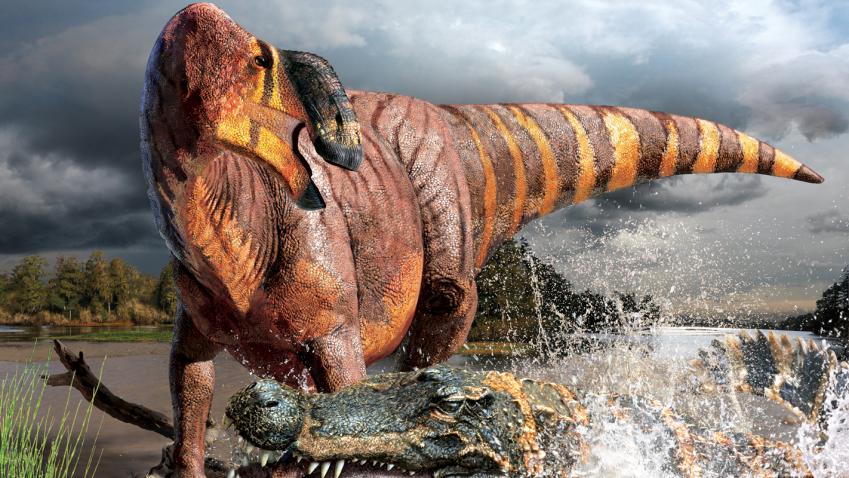 This summer has been extremely rich from a paleontological point of view. A wide range of announcements included the largest birds that ever flew and the only known swimming dinosaur. Now, Utah unearthed fossil convinced scientists they have discovered a new dinosaur species they named Rhinorex condrupus. Rhinorex literally means ‘nose king’. Yes, you got it right, this dinosaurs had one impressive nose.

The herbivore Rhinorex lived around 75 million years ago in what were then Utah swamps. Rhinorex is a hadrosaur similar to Gryposaurus, but its flamboyant nose makes the 30 feet and 4 tones Rhinorex stand out. The two scientists had a couple of materials available for analysis: the dinosaur’s skull, a partial sandstone encased skeleton, and skin impressions.

“If this dinosaur is anything like its relatives then it likely did not have a super sense of smell,” NC State postdoctoral researcher Terry Gates said in a statement, “but maybe the nose was used as a means of attracting mates, recognizing members of its species, or even as a large attachment for a plant-smashing beak. We are already sniffing out answers to these questions.”

The king’s nose is not so much important in itself as for what it can unravel about different dinosaur lineages and the overall grand evolutionary scheme. Gates and Scheetz are not certain yet if Rhinorex lived in the same time as Gryposaurus or not. While the nose king dinosaur fossils indicate the animal lived in what was then an estuary, Gryposaurus appears to have lived in a more upland habitat.

The environmental diversity from back then is striking. Fossils found on Utah territory may end up revealing some important links between the dinosaurs living long time ago. The land conformation influenced the development of several species of dinosaurs.

So did Gryposaurus and Rhinorex live in the same period? Perhaps. But the 155 miles between the two habitats are not insurmountable for such huge animals. Another hypothesis is that Rhinorex is a Gryposaurus who travelled closer to the seashore and suffered mutations along the way. Unfortunately, there no clear explanation for the imposing nose was delivered by the two paleontologists. However, if Rhinorex is the evolved Gryposaurus, it would be its descendent and would thus be connected to the later Kritosaurus.