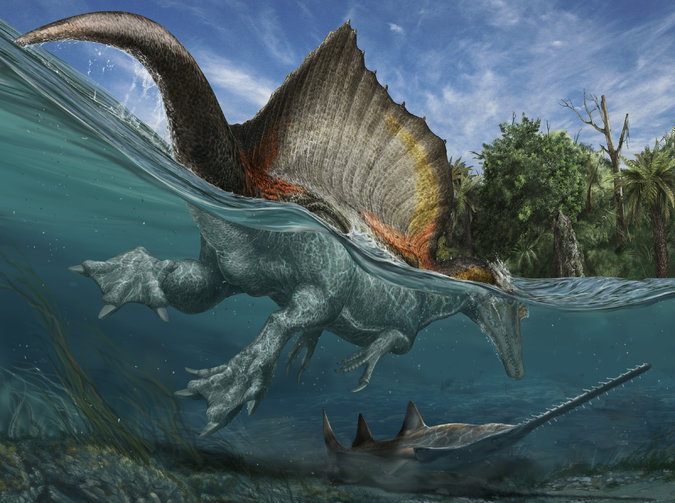 Spinosaurus aegyptiacus was a large predator roaming the Earth 95 million years ago. Researchers discovered fossils of the dinosaur they believe was 9 ft longer than Tyrannosaurus Rex, but having a similar size. The weird looking animal was an unusual dinosaur, as it is known as the only one to have adapted for a semi-aquatic lifestyle. During swimming, the massive back sail probably looked like a shark’s fin to the other aquatic creatures. The impressive crest reached 1.8 meters.

“The animal is unlike any other predatory dinosaur. There’s no blueprint for it. There’s no modern-day equivalent for it. It’s looking at a completely new kind of animal,” said the study’s main author, University of Chicago paleontologist Nizar Ibrahim.

Spinosaurus lived in Northern Africa, being a terror for animals in rivers spanning today’s Morocco, Libya or Egypt. Being a quadruped dinosaur makes Spinosaurus a unique ancient predator, as T. Rex, Allosaurus and Giganotosaurus are balanced on their hips, using only two feet.

However, Spinosaurus seems to have been more agile in the water than on land. While other ancient marine predators lived in water as well, like the plesiosaur and mosasaur, they were reptiles. Spinosaurus is the only dinosaur adapted for the aquatic lifestyle.

Scientists have long suggested that Spinosaurus lived in water, but new analysis confirmed the hunch. “The one thing we noticed was that the proportions were really bizarre,” Dr. Ibrahim said. “The hind limbs were shorter than in other predatory dinosaurs, the foot claws were quite wide and the feet almost paddle shaped.” The scientist pointed that the dinosaur’s snout presented teeth similar to those of fish-eating crocodiles. Moreover, the animal’s nostrils are located in the upper part of the skull, a feature useful for breathing during swimming.

Another hint was the density of the animal’s bones. Like the penguin and sea cows, Spinosaurus has high density bones. However, the imposing dorsal sail does not seem to have been used for swimming. Instead, it appears to have had an important role in attracting mates.

The story of Spinosaurus fossils leading to this conclusions is quite adventurous. The German paleontologist Ernest Stromer placed the Spinosaurus fossils in the Bavarian State Collection of Paleontology in Munich. A British airstrike in WWII destroyed the museum, along with numerous precious fossils.

Dr. Ibrahim was excavating fossils in Morroco in 2008 when a nomad randomly offered him a fossil that proved to be from a Spinosaurus. Later in Italy, Ibrahim discovered another fossil, which seemed to belong to the same animal. So Ibrahim later returned to Morroco to find “a man with a moustache”, and fortunately found. The man with a moustache then showed Ibrahim a site where other fossils were located.