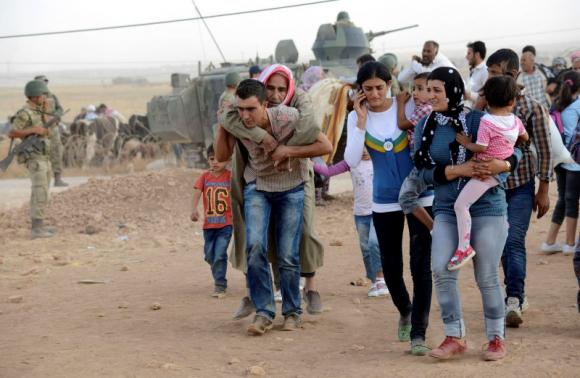 While the United Nations had estimated the number of Syrian Kurds that had fled into neighboring Turkey at 100,000 people, the Islamic State was growing closer to the Syrian border town. The U.N. believes that the number of refugees will surely go much higher.

According to residents who had managed to flee from the Sunni extremist militants attacking Ayn al-Arab and its surrounding villages, ISIS fighters were executing all those who fell into their hands in hopes of creating a climate of obedience and fear.

While refugees were flooding the border, Kurdish politicians in Turkey were urging young Kurds to cross the border into Syria and aid their ethnic kin. The Kurdish southeast received repeated pleas to help push back the Islamic State, which has aggressively seized enormous territories of Iraq and Syria over recent months.

Welat Avar, a doctor in the city of Kobani, told reporters that “ISIL (Islamic State) are continuing to advance. Every place they pass through they kill, wound and kidnap people. Many people are missing and we believe they were kidnapped.” The doctor continued telling reporters about the ordeal in the Syrian town: “We now urgently need medicines and equipment for operations. We have many casualties … ISIL killed many people in the villages. They cut off the heads of two people, I saw it with my own eyes.”

Kurdish politicians claim that ISIS’s tactic is more of a genocide operation than a war. Ibrahim Binici, Turkey’s pro-Kurdish party deputy, described the situation as being shameful for humanity.

This escalating situation may inspire the United States to consider extending their airstrikes over Syrian territory, however, it’s not clear if this represents a possible solution. U.S. Ambassador, Samantha Power, proudly informed the public that many other countries were prepared to support the United States in launching airstrikes in Syria. She claimed that airstrikes would no longer be performed alone.

“We’re going to leave it to other nations to announce for themselves what their specific commitments to the coalition are going to be.”, Power said.

In the meantime, the refugees fleeing into Turkey can’t help but ask themselves where the humanity is and why the world is not reacting.

Since Tuesday, 64 villages have been seized by the Islamic State all around Kobani. At least 11 civilians were executed on Saturday, the Syrian Observatory reported. During the overnight clashes, 10 insurgents were killed, bringing the total number of IS fighters killed to 39 and the number of Kurdish fighters to 27.