Mohammed Shia’ Al Sudani, Iraq’s Human Rights Minister said that the Iraqi population is now facing a terrorist monster as the United Nations Human Rights Council had been assembled for an emergency sitting. 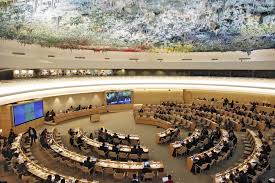 The Council adopted a resolution that involves sending a team of 11 investigators to analyze the Islamic State’s crimes and report back no later than March 2015. The total budget of the mission is $1.18 million.

Western governments have all cited the Islamic State as a major security threat after the group took over large regions in Iraq and Syria and declared a “caliphate” in June. The extremist group then posted a video in August showing the brutal beheading of an U.S. Journalist, James Foley, that had been in their power for over a year.

In the face of these brutal militants, more than 1.2 million people were forced to abandon their homes this year, according to a U.N. report. Additionally, in August alone, more than 1,420 people lost their lives because of sectarian violence.

In light of these atrocious crimes, U.N. Deputy High Commissioner for Human Rights, Flavia Pansieri, noted the undisputable evidence that the Islamic State had done unspeakable damage, had requested forced conversions at the threat of beheading, hat carried out targeted killings, sexual abuse and torture in Iraq.

Pansieri said: “The reports we have received reveal acts of inhumanity on an unimaginable scale.”

The Commissioner went on to address the issue of religious persecution that Christians, Yazidis, Shia and Turkmen have all faced because of the extremist group. She suggested that this persecution amounts to crimes against humanity.

The ISIS group has even used children as human shields after they forcibly recruited children belonging to targeted minorities and positioned them in the front lines. They also forced children to donate blood and beat women for breaking rules such as being veiled or having a male escort at all times.

Al-Sudani told the Council that “The land of ancient Babylon is subjected to threats, starting with threats to its very independence. They are attempting to change its demographic and cultural composition.”

However, concerns have also been raised because of the Iraqi government response to the extremist militants, as they too have engaged in acts of violence that, in Pansieri’s mind, may also amount to war crimes.