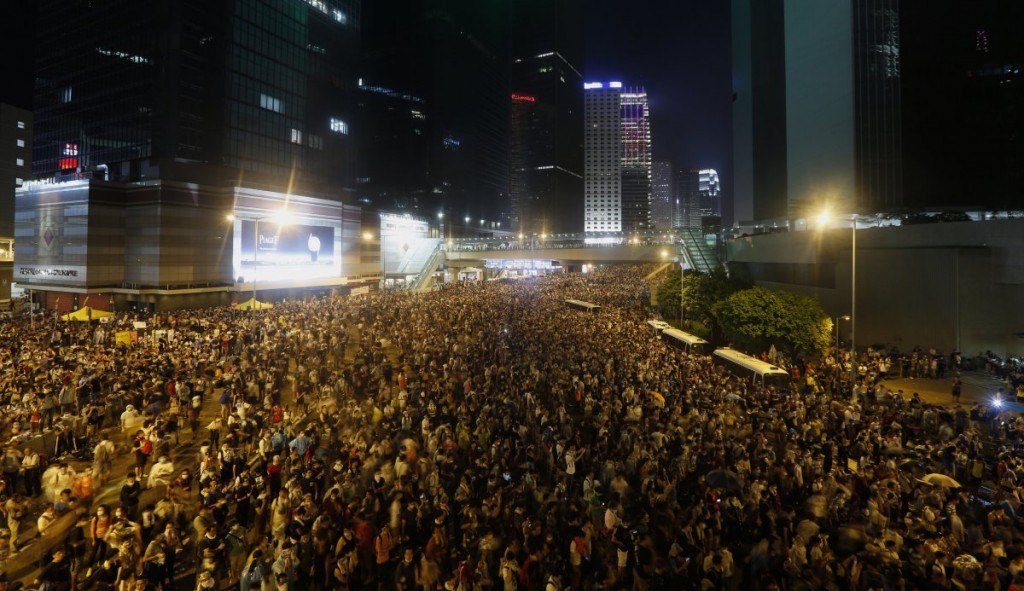 Hong Kong returned to China in 1997 after Britain and China signed an agreement in 1984. One of the key principles stated in the agreement was that China will award Hong Kong with “a high degree of autonomy, except in foreign and defence affairs.” Lately, the Chinese government seems to have adopted a different position. In 2008, China said it will allow direct elections in Hong Kong, but in August 2014 added that it will only allow it from a list of pre-approved candidates.

Beijing’s decision to interfere with Hong Kong’s plans for the 2017 election resulted in massive demonstrations. People from Hong Kong want to organize direct elections, but the Chinese authorities want to prevent that from happening. Students started boycotting classes last week and protests have reached their peak on Sunday night.

On Monday, commercial activities are on pause and schools have been closed in Hong Kong as protesters maintain their positions. Tens of thousands of people block the streets, even after riot police released tear gas. Police may use rubber bullets, according to rumors, but people have not ceased ground. Twenty-six people have been hospitalized so far after they have been exposed to tear gas and police brutality. Others brought surgical masks as a form of protection. Police arrested 78 people.

Chinese political leaders must be increasingly concerned. Instagram is blocked in China at the moment. As there are many others in the mainland who are not happy with the one-party rule, the party fears that protests may spread. So far, the Chinese authorities left the affair in the hands of local police, but that might change soon.

However, the events of 1989 in Tianmen square have not been forgotten. Similarly, students are among the most vocal protestors, so the Chinese authorities will probably avoid provoking another international scandal.

The unpopular Hong Kong’s Chief Executive, Leung Chun-ying believes that people will be successfully forced to adapt to the new situation. “I hope the public will keep calm. Don’t be misled by the rumors. Police will strive to maintain social order, including ensuring smooth traffic and ensuring the public safety,” Leung said. “When they carry out their duties, they will use their maximum discretion.”

Around 200 bus routes have been affected and subway exits have been blocked, according to Associated Press reporters. There are signs that the protests will intensify, as claims are not taken into consideration and frustration grows.