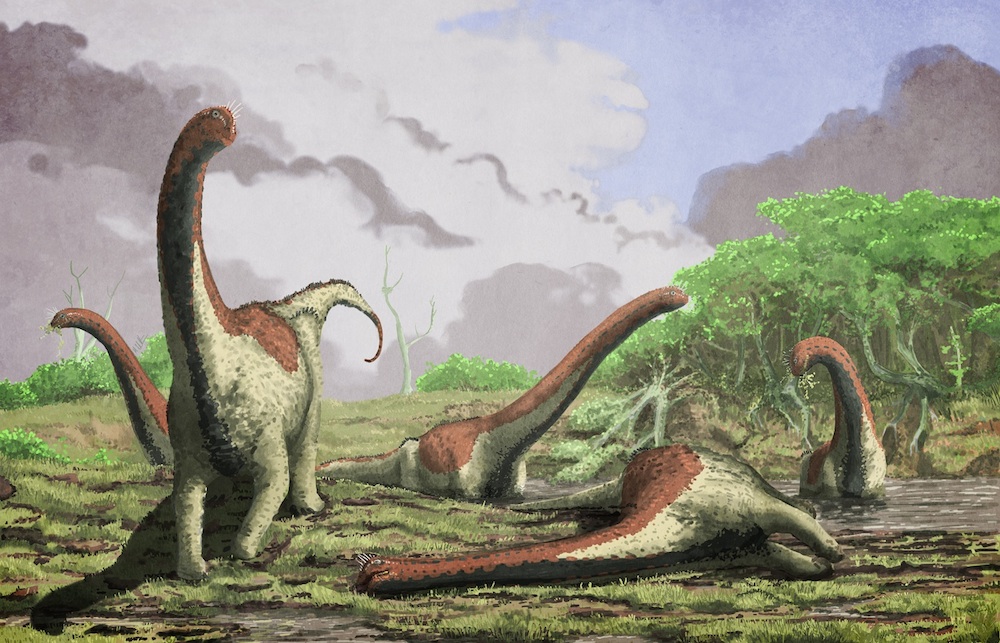 South America has so far been a great resource for titanosaurian fossils. Researchers from Ohio University recently discovered another member of the species in a cliff wall located in Tanzania. Titanosaurian, as its name suggests, is a member of the largest dinosaur family, sauropods, one of the last dinosaur species.

Rukwa Rift Basin of southwestern Tanzania is the site where the fossils have been unearthed. During two field sessions, researchers dug the area with help from the miners and excavation specialists. After careful comparison with fossils of South American titanosaurians, along with CT scans, Ohio University researchers concluded they discovered a new dinosaur species which they called Rukwatitan bisepultus – Titan, after the Greek deity and bisepultus, which means double buries in Latin.

This dinosaur lived around 100 million years ago, during the mid-Cretaceous period. It was not the largest sauropod, although its forelimb could have reached 2 meters. Rukwatitan bisepultus was found to be very similar to Malawisaurus dixeyi, another titanosaurian found in Malawi, the nearby country. However, the two dinosaurs are clearly different from each other and, together, different from other dinosaurs discovered in Northern Africa.

Finding dinosaur fossils in Africa is a challenging endeavor because of a couple of reasons. The continent has not moved as much as the others, meaning that fossils remained buried deeper. Ideal places with sediments where dinosaurs could have been preserved are rarely encountered in Africa. Secondly, the political context in many African countries makes it difficult for researchers to safely search for and excavate fossils. Fortunately, the remains of this specimen of Rukwatitan bisepultus have been buried not once, but twice by sediments favoring fossilization.

By looking at other fossils found in the Rukwa Rift Basin, researchers believe the area might have been very distinct and animals could have encountered mobility limitations, forcing them to adapt together to the same conditions.

“Much of what we know regarding titanosaurian evolutionary history stems from numerous discoveries in South America—a continent that underwent a steady separation from Africa during the first half of the Cretaceous Period,” Gorscak said. “With the discovery of Rukwatitan and study of the material in nearby Malawi, we are beginning to fill a significant gap from a large part of the world.”

Only four titanosaurians have been discovered in Africa, just a few, compared to the 30 in South America, so Rukwatitan bisepultus will help researchers better understand the lineages of these gigantic creatures.